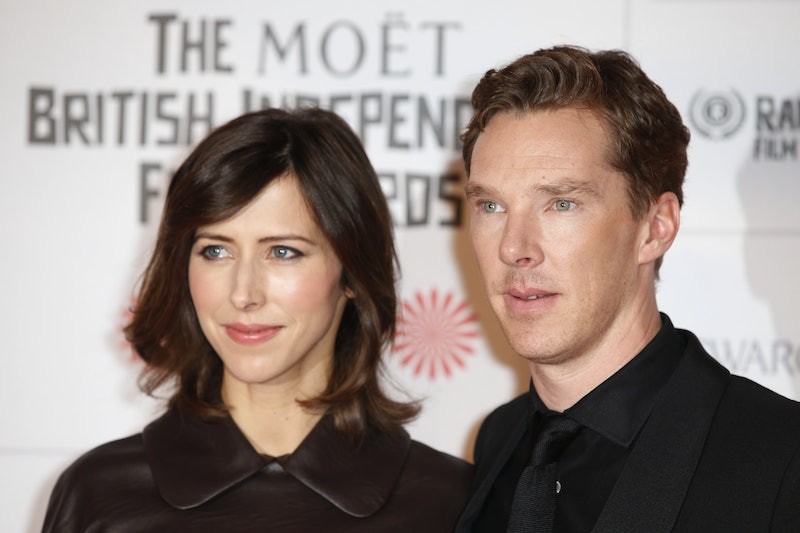 With the googly-eyed giddiness of Valentine's Day upon us, it feels even more fitting to contribute to the ongoing obsession over Benedict Cumberbatch and Sophie Hunter's wedding, which took place on Saturday, Feb. 14. Exchanging vows on the official day for lovers feels a little cliché, but, considering the couple got hitched at the absolutely gorgeous St. Peter and St. Paul’s Church in Mottistone in Isle of Wight, England, it's safe to assume it was probably anything but a run-of-the-mill ceremony. But, now, comes the unapologetically predictable question that's begging for an answer: Where are their wedding photos?

Since the couple were reportedly trying to keep the affair low-key and Cumberbatch doesn't have a social media presence, it's not exactly surprising that wedding selfies or other personal photos of their big day aren't already cropping up everywhere online.

That's not to say that nophotos of the big day have popped up yet, however: There are some paparazzi photos from Saturday's event floating around on Tumblr where Cumberbatch and Hunter can be seen outside the venue in full on wedding attire, but the shots are grainy at best — not to mention, they're paparazzi shots, and in no way official from Cumberbatch and Hunter themselves.That said, let's all all keep our fingers crossed that the newlyweds will be a little more forthcoming about giving us a peek into the ceremony than they were with their traditional newspaper engagement announcement. Hopefully Cumberbatch realizes that his devoted fans absolutely require a wee bit more info than a cryptic write-up in the Times. When it comes to his wedding, fans will undoubtedly transform into Sherlock clones, anxiously digging up clues and refusing to rest until they have the details of who wore what and which celebrities were among the wedding guests (was Tom Hiddleston there?! WE NEED TO KNOW), all while imagining how adorable Hunter and her baby bump looked in her wedding gown. Since he's already established himself as one of the nicest celebs ever who really cares about his fans, I don't see how he'll get out of coughing up the wedding day candids before his "Cumberbabes" go completely insane. Besides, there are still some of us who are trying to decide whether Cumberbatch is sexier than Sherlock Holmes — so we'll definitely need those official wedding photos to make a final decision.