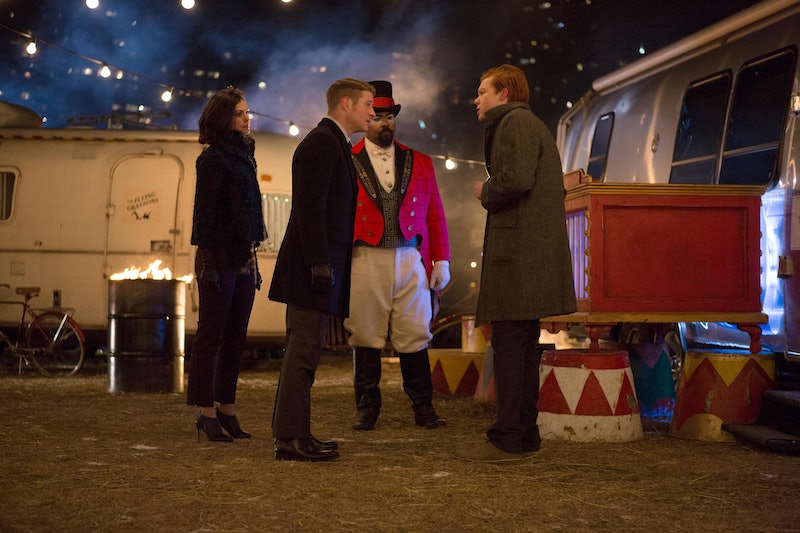 The Feb. 16 episode of Gotham is big news because it's teasing the introduction of a new TV version of the Joker, but who is "The Blind Fortune Teller" referenced in the episode title? Since it takes place at the circus, it's probably safe to say that this fortune teller has a reason to be at the edges of the episode. Previews show a murder will take place at the circus, and when Gordon arrives to start interrogating potential suspects, among them could be a fortune teller, crystal ball and all. But neither the episode synopsis nor the cast list for Gotham 's "The Blind Fortune Teller" mentions one, so I think the likely young Joker, Jerome, as well as the introduction of Robin's parents, feuding acrobats Mary Lloyd and John Grayson, will become the main focus of this episode.

Speaking of which, it's also possible that the potential Joker, Jerome, could be working at the circus as a fake blind fortune teller. Since he grew up with a mother who worked in the circus (and one of the previews makes it sound like his mother is the victim of the murder), maybe that's his schtick. It would be very reminiscent of American Horror Story: Freak Show. There's also a good chance that "the blind fortune teller" is some kind of folktale passed down through generations of carnival workers that will either help Gordon solve the murder or provide some kind of break in the case. I feel like Ed Nygma would also get a kick out of a riddle or a joke about blind fortune tellers. But who knows — those Gotham writers absolutely love writing in obscure comics characters (hello, Electrocutioner). So there are a few different circus-themed villains in the Batman mythos who could take up this mantle.

The Circus of Strange

This is exactly what it sounds like: a strange circus filled with evil performers who are enemies of Batman. There's usually no one blind or a fortune teller or both, but it's always possible that Haly Circus could get an evil makeover by the end of the episode.

This villain made it onto a "Top Ten Lamest Batman Villains" list, but he is a blind Batman villain, albeit not circus-themed whatsoever. Instead, he's a Vietnam veteran who got an experimental surgery that allowed him to "see" with the tips of his fingers. I mean, that is a pretty lame superpower, so his entrance on that list makes sense.

Despite the name, no, he is not a serial killer. Instead, he's a "carnival mystic," who uses astrology to plan out his victims' deaths. Later on, he is bestowed with real magical powers by some coins from Atlantis, but that doesn't sound like it would go with Gotham's tone. Dr. Zodiac? Sure sounds pretty close to a "blind fortune teller..." give or take the blind part. Maybe he'll be the Gotham inspiration.