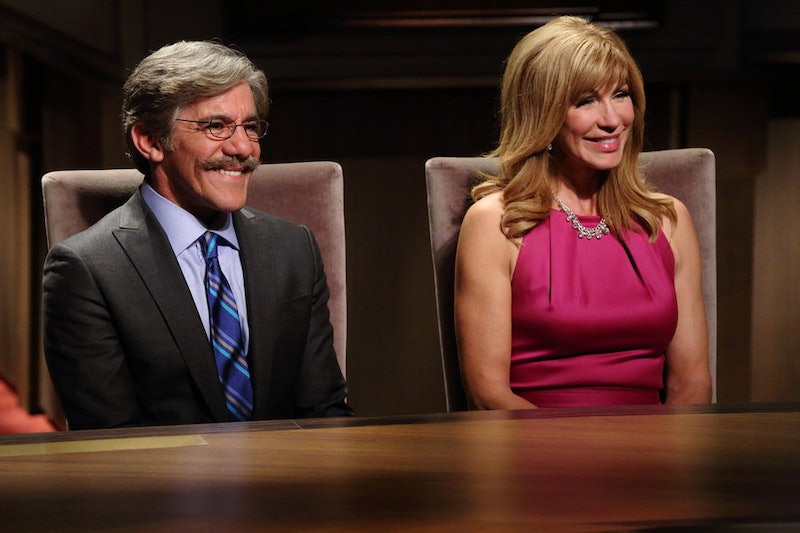 After nine episodes, plenty of drama, and a lot of firing done by Donald Trump, the winner of Celebrity Apprentice Season 14 is Leeza Gibbons. It really should come as no surprise that Gibbons won, because, well, she was in the final two. Also, I think we all knew from the very beginning that it'd either be Gibbons or Rivera. In my opinion, Gibbons definitely deserved to win. From the get-go, she showed great leadership, intelligence, and talent when it came to going above and beyond for her team and charity. Not to mention, she was extremely humble and kind throughout the entire process. As for Rivera, viewers knew he'd make to the final two. Not only did Trump appear to adore the reporter, but Rivera played the game like a true competitor since Episode 1, aka he was fierce and ruthless.

As for this last task based around Universal Studios, both Gibbons and Rivera had strong teams. Gibbons seemed to have her team more united, save for Brandi Glanville and Johnny Damon taking off for a beer and a hotdog, compared to Rivera (surprise, surprise) who went off and did his own thing, while ignoring some of his team's work. In the end, both teams came together and produced projects that raised a lot of money for their charities. However, Gibbons pulled it off and will now be remembered as the Season 14 winner.

I'm really glad Gibbons ended up winning. Yes, she deserved it, but another reason I'm thrilled with Gibbons' win is that she's the second woman (Joan Rivers was first) to be crowned the winner. Now, we can, thankfully, add another female to the winners list. It's about time another woman is recognized for her smarts, business skills, charitable endeavors, humility, among many other worthy qualities. Also, it's important to add that she won the final task and raised more money than Rivera, which some thought would ever happen, because he's been the top fundraiser throughout the entire season.

Also, let's hope this puts Donald Trump in his place, because he told Gibbons he was "surprised" she made it to the end. Apparently, he didn't find her tough enough and didn't think she'd do well when it came to business. But, Gibbons gave the best response, which proves why she is the winner and just how classy of a woman she is. She said, "Never underestimate a woman with passion who knows where she's going and what she wants." Take that, Trump. Take that.

With that said, congrats to Gibbons on her win and raising money for her charity, because, let's face it, that's what really matters in the end. Lastly, if you're sad Celebrity Apprentice is over, it will be back for Season 15, aka more drama is headed our way!