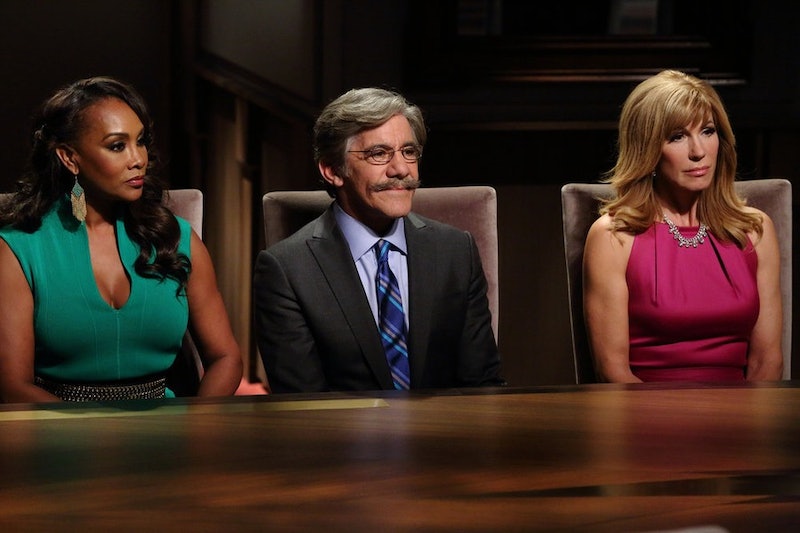 Last Monday night's episode of Celebrity Apprentice revealed that Leeza Gibbons and Geraldo Rivera would go on to be Season 14's final two contestants. And while this reveal wasn't particularly shocking in any way, it's bound to make for one very action-packed season finale. As viewers know all too well at this point, Leeza and Geraldo have been the most qualified candidates for the job since pretty much Day 1. However, now that some of the previously "fired" contestants will return to help bring their team leaders to either glory or defeat, it'll be interesting to see them all working together once more if, for no other reason, to see how all of the inevitable drama ensues.

But shouting matches and power plays aside, the main question on everyone's mind all boils down to one thing: who has the better chance of winning, Leeza or Geraldo? Sure, we all have our personal favorites we'd like to see achieve victory, but our backing alone isn't enough. So as we get nearer and nearer to the final showdown, I thought it would be fun to pit Leeza and Geraldo up against each other before Monday's finale and see whose odds are in the most favor of being crowned when push comes to shove.

You can know a million different business strategies, but if you don't have the support of your team then you're pretty much dead in the water. Yes, in this industry it's important to be extremely business savvy, but it's almost just as important to be well-liked… something that Geraldo has fallen short with this season. (Remember when both Lorenzo Lamas and Ian Ziering conspired to get him fired? Not exactly who you'd want as your finalist teammates, amirite?) Meanwhile, Leeza has proven that she can pretty much get along with everyone, which could give her a leg up on the competition during the final challenge. I mean, when you have the endorsement of Vivica A. Fox in your pocket, you're pretty much set for life.

Though both have proven to be extremely shrewd business leaders, Geraldo has brought in a ton of money for a large portion of the challenges. So as much as you may not enjoy the pleasure (or lack thereof) of his company, you can't deny that the guy has access to some very deep pockets. And when it comes to these projects, the proper fundraising can make or break you success.

On the other hand, while Geraldo may have a stronger fiscal backing, there's no denying that many of his ideas of just plain awful. I'm still not over the tangent he went on about doing a Revolutionary War theme a few weeks back. So he can try to throw as much money at the challenge as he wants, but without a strong, creative idea to support it, his entire plan could go up in flames. Leeza, on the other hand, has contributed a number of great ideas throughout the season, making her the more likely candidate to give us that much needed "wow" factor.

Sure, Trump has tended to show favoritism toward Geraldo from the very start, but I have to believe that when it comes down to something as important as the finale, Trump won't let his emotions cloud his judgment. He'll choose whoever pulls off the challenge better despite his feelings for either competitor. After all, you don't get to be Donald Trump without knowing when to leave your personal issues at the door.

So there you have it, folks. From the look of things, Leeza will be the clear winner. Could I be wrong about this? Sure. But hey, what's the worst they could do? Fire me?