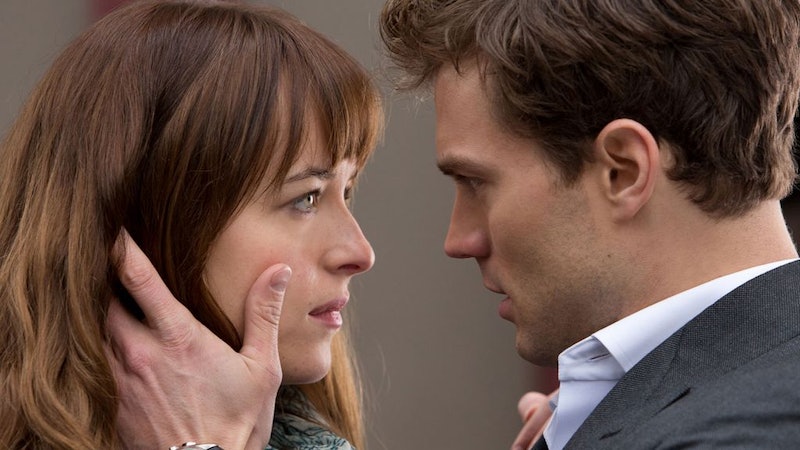 I spent this snowy Valentine's Day in New Hampshire indoors with my live-in boyfriend cuddled on the couch with pizza and wine. That's as perfectly romantic for me as it can get, but then I got a wild hair and decided to up the ante. I don't know if it was all the Malbec, all the cheese, or the intense cabin fever, but I was able to persuade my boyfriend to see Fifty Shades of Grey with me. I KNOW. See, most of my female friends had refused to read the books and weren't so keen on seeing the movie, so if I wanted to see Fifty Shades in theaters, I had to go alone — or with the bf.

Thankfully, Brendan (the man has a name!) agreed to see it with me. Although he later claimed to have felt "tricked" by the situation, the experience really wasn't that painful for him (not like it was for Anastasia Steele — boom!) and it was super amusing for me.

I read all of the Fifty Shades of Grey books because I'm into pop culture phenomenons, I don't like to give up on a book series, and I guess I categorize myself as a Twilight fan (which Fifty Shades was based off of). I had just moved in with Brendan back in 2012 when I read the books, so he has been going on this Fifty Shades journey for the better part of three years. It seemed only right for him to watch the movie with me.

I told him the movie tickets were on me since he had absolutely no desire to go to this movie, but he dug out his car and drove us there during a blizzard warning, so he was obviously somewhat committed. (That's love, folks.) I purchased the tickets anyway because I figured I owed him that much.

The fun began during the previews. During the trailer for Magic Mike XXL, he realized he had not adequately prepared himself for what to expect. That trailer was followed by Cinderella, so he received clear insight into what movie execs believe women seeing Fifty Shades of Grey want. (Of course, I found the choice of previews to be spot-on.)

Brendan was pretty well-behaved during the beginning of the movie, but once the sexual intrigue started coming, he could not contain himself. Now, Brendan is a man who watches Downton Abbey with me and makes me giggle at his Lady Cora impersonations. So, I knew this was going to get good.

Here are some of my favorite quotes from my boyfriend during the viewing of Fifty Shades of Grey:

His overall review of the movie? "It was pretty bad, but not as bad as it could have been." As I was monitoring his movements during the film, he gave a big yawn during Christian's backstory of his birthmother and he was uncontrollably laughing during the punishment scene. He explained that he was laughing at Jamie Dornan's face because he couldn't tell what emotions he was conveying — if he was getting pleasure or feeling sad. But those scenes weren't his biggest issues. He had major gripes with two other moments of the film.

During their first bondage moment, when Christian puts the tie around Anastasia's wrists, he couldn't handle the musical score. "The music is like when a teenager throws his first strike in a sports movie. It leads to the worst to first montage where the team goes from a ragtag bunch of losers to the lovable underdog winners." And he didn't understand Christian's wardrobe choice for the red room of pain. "His jeans are too f*cking much." He described them as "early 2000s bro jeans."

Both of us were generally impressed with the acting of Dakota Johnson, but he didn't like the character of Anastasia. His takeaway: "I don't know why she trusted him so much."

Although I could chalk-up Brendan agreeing to see Fifty Shades with me as the ultimate Valentine's Day gift, I think his feminist-friendly and humorous view of the movie are what I'm most thankful for.