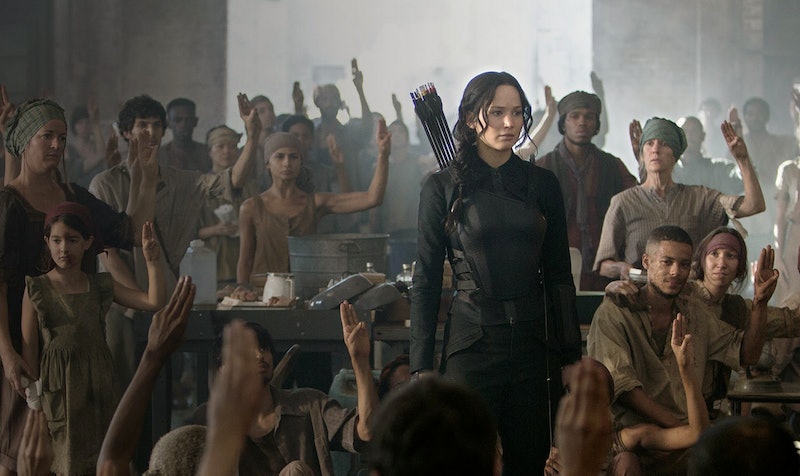 We've got a while to wait until the final Hunger Games movie hits theaters, but that doesn't change the fact that it's one of my most highly-anticipated films of 2015. It also doesn't change how much is riding on this final chapter in the series — not financially (they've got that covered at this point), but narratively. The first two films followed the ramping-up of a revolution, Mockingjay, Part 1 showed us that the revolution had arrived and then some, and come Nov. 20, 2015 Mockingjay, Part 2 is tasked with showing us the payoff. This thing's about to hit its climax, so what will that look like?

The final Hunger Games book is also the most scattered, but it contains some of the most important messaging and narrative work of the series — work which, I think, could be even better onscreen than it was on the page. It's obvious that some things aren't going to make the cut — but there are some things that definitely should. Here's the stuff this movie might not be able to afford to ditch if they want to keep in tone with the first Mockingjay movie and the bleakness of Suzanne Collins' visions of humanity.

A lot of time in the Hunger Games books is spent following Katniss as she rebells against, well, pretty much every order she gets in one way or another. And that part of Katniss never really goes away, but one important shift takes place in the final book: Katniss realizes that if she truly wants to participate in this revolution and claim justice for her fellow citizens and everyone they've lost, she needs to let other people educate her. And so she and Johanna go through the same basic training as all the rest of the soldiers. It's a sequence of events that challenges Katniss as she truly commits to her path — and it'd also make for a pretty badass training montage, I'm just sayin'.

Where we are in the story right now Peeta has been returned to the rebels after being thoroughly and horrifically brainwashed by the Capitol. Mockingjay, Part 2 is tasked with showing us the rebuilding of Peeta — and some really touching/sad/beautiful moments between Katniss and Peeta as Peeta tries to figure out what was real between them and what wasn't. Something Katniss really needs to figure out, herself. Done right, it's exactly what the audience needs to see just how important these two are to each other's lives regardless of love triangles.

The Decision For One Final Game

At one point after the Capitol has fallen the surviving victors gather to vote on whether or not to hold one last Games, but with children of the Capitol's high-powered as the players. It should be noted that the given alternative would be to eliminate the entire Capitol population. It's a truly interesting moral moment in the series, and I hope they decide to bring that turning of the tables to the big screen.

The thing that really drives Katniss and Gale apart — both as friends and as potential romantic partners — isn't anything to do with their love triangle, but rather in some fundamental differences in how they think of wartime and the fight. More specifically, it's that Gale had a hand in designing the bomb that ends up killing Katniss' sister. I sincerely hope the films retain Gale's fire in the final film — and the debate over humane war tactics (and if those even exist) that it evokes.

There are some gut-punch deaths in this series, but I think it's fair to say none hits Katniss as hard as losing her little sister. Katniss is a character driven by whoever she's tasked herself with protecting (see: Peeta, see: Rue), and Prim is always at the top of that list. I highly doubt they'll cut out her dying, but it's both her death and the full brunt of what it takes out out Katniss that ultimately shows us just how bleak this series' views are, and in kind of a necessary way.

Prim is why Katniss entered the games in the first place — this entire thing started with her trying to save her little sister's life. That it ends with that life being taken away moments before "victory" (and while Prim is working to save other people's lives, to boot) speaks volumes of the true horrors of war and the human sacrifices it involves. That Prim's killed not by Capitol weaponry but by a bomb designed by the Rebel side? That speaks even more. It's not exactly gonna be a cheerful moment in the theater, but it's a gut-punch that's crucial to Suzanne Collins' portrait of humans and power.

Another twist that speaks volumes about the series' take on the corruptions of power: When Katniss moves to execute President Snow but at the last minute turns her arrow towards President Coin instead.

The Epilogue (The Aftermath)

Specifically, the healing and — even moreso — the lack thereof. This series doesn't exactly get a happy ending. It could have been much bleaker, but while we get Katniss and Peeta together and away from war and the Capitol fallen, it's made very clear that there is no such thing as a full recovery after everything that the two of them and their world has been through. Still, though, they move forward, and they march on. That dichotomy is at the core of the series, and it's necessary for this ending: They've lost too much of the people they love and of themselves, but they're still going.

My children, who don't know they play on a graveyard. Peeta says it will be okay. We have each other. And the book. We can make them understand in a way that will make them braver. But one day I'l have to explain about my nightmares. Why they came. Why they won't ever really go away.

I'l tell them how I survive it. I'll tell them that on bad mornings, it feels impossible to take pleasure in anything because I'm afraid it could be taken away. That's when I make a list in my head of every act of goodness I've seen someone do. It's like a game. Repetitive. Even a little tedious after more than twenty years.

But there are much worse games to play.