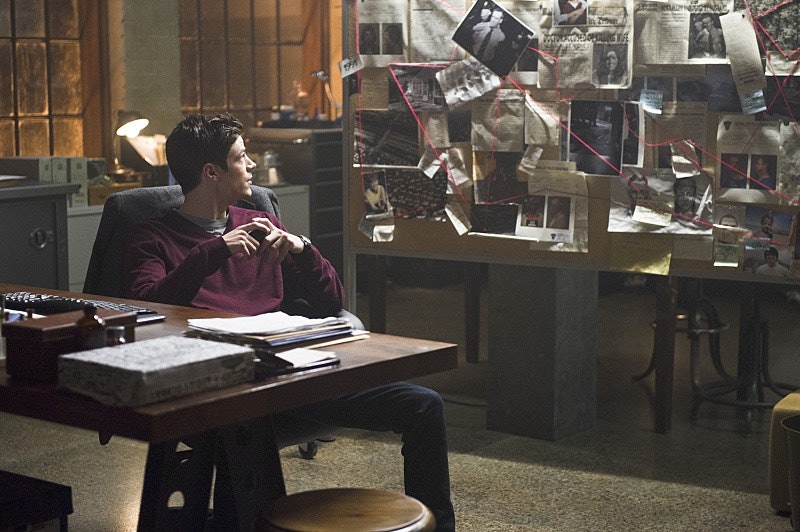 If you've managed to somehow miss the Big News about The Flash , time travel is coming to Central City. It's an idea that's been teased and talked about in hushed tones since the beginning of the show, but now its arrival has finally been confirmed. For starters, Cisco and Joe both know that it was adult Barry in the house the night his mother was killed... and unless time travel was involved, how the heck did he end up there? That's just the tip of the time travel iceberg, too. What does time travel mean for the rest of The Flash's first season?

Even though time travel coming to the show might sound crazy, Barry Allen isn't completely freaked out by it. According to TVLine, Episode 15 will be the big episode when time travel is introduced, and it looks like Barry thinks he can use it to his advantage. In an interview with Entertainment Weekly, Grant Gustin explained that he winds up in a Groundhog Day-type situation, and said that Barry "realizes, ‘Holy s**t, this an opportunity to change things with my family’s past.'" Though I'm not exactly optimistic about his efforts.

Tom Cavanagh, Mr. Harrison Wells himself, has more to say about time travel, too. He told The Hollywood Reporter that he only signed onto the show to play a "time traveling bandit." Speaking about longtime fans of the comics, he added that fans "know Reverse-Flash and The Flash are not just doing this right now in the present day." Basically, they're doing it everywhere, all the time.

Sounds like everyone on The Flash is completely cool with the idea of time travel, but what about the people of Central City?

Aside from Cisco and Joe, I doubt anyone else is even aware of the whole time travel thing. And it's not like the show is suddenly going to become The Flash Back to the Future. Nope, it's still going to stick to its roots, which is a story about Barry trying to figure out his new powers while saving the day. Time travel is just one of the key elements of that story, so it had to be introduced eventually, but that doesn't mean it will overpower The Flash.