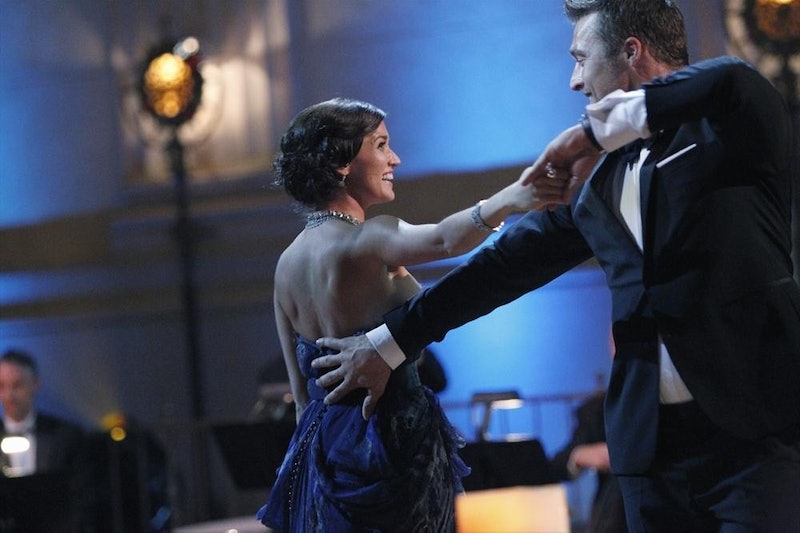 The Bachelor is officially down to a top three, and I am officially more confused about the way this season is ending than I have ever been, and my confusion happened in two stages. First, he took Jade's Playboy confession with incredible maturity and understanding — aka the exact opposite of what I expected to happen — and then turned around and eliminated her. I'm sorry, what? After meeting her dad, after hearing her talk about how she could envision a life with him and having such a sweet moment with him in her hometown, and Chris telling Jade his feelings for her are genuine, Chris decided to eliminate Jade, and that decision alone basically makes me question any decisions Chris has made all season long.

Why? Unfortunately, our Bachelor seems to have a track record for telling people what they want to hear and then doing what he wants anyway. Chris is a classic people pleaser, which can be good in the way that he can (generally) relate well to people, but not so good when he's trying to make connections with women who are seriously considering spending the rest of their lives with him. It's really important that he be upfront and honest about his feelings this late in the game, especially when he has to narrow it down to his top two.

Chris, I want to trust you, but I don't know if I can — or if any of the remaining women should. You've yet to make a real decision that wasn't influenced by someone else or something else (even if we can't necessarily prove that Jade's Playboy past was the nail in the coffin). Even Chris' elimination of Britt seemed to be influenced more by Carly and Britt's ability to oppose him than it was something that feels right "in his heart."

I don't know if we can trust Chris, but I do know that it's definitely going to be an interesting few weeks leading up to the finale.