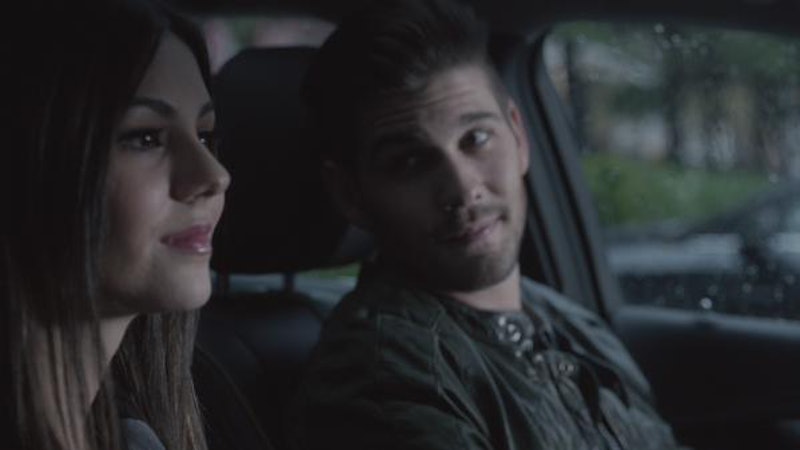 I get Tindy fans. I am totally with you. Things between Tommy and Lindy on Eye Candy just keep getting cuter and cuter, and now even I am starting to root for team Tindy to get together already, despite originally thinking it might be too soon for them to date after Ben's untimely death at the hands of the Flirtual killer. But there is one huge problem that keeps creeping over the horizon: Jake Bolin. So what is Eye Candy to do? Clearly, this Tommy/Lindy/Jake love triangle will be sticking around for a while, and to be honest, it's really making the series that much more interesting to watch.

Now that Jake, the Australian hunk has been cleared of any suspicion of being the Flirtual killer, he and Lindy have been engaging in some passionate moments and some great sexual tension. At the start of Monday night's episode "ICU," Lindy and Jake were scheduled to go on a date that Jake had to cancel and Tommy showed up to almost ruin anyway. Tommy and Lindy then worked on an "off the books" case together as pretended to be engaged while Lindy went undercover, providing fans with even more reason to want the semi-partners to be together already.

The hacker and cop help Tommy's ex-girlfriend Dr. Wells, a surgeon, figure out why machines at her hospital keep failing. In a rather frightening opening scene, Dr. Wells is operating on a young man's brain when the OR is flooded with nitrus oxide. The IT staff at hospital claim that nothing is wrong on their end, but Tommy and Lindy figure out that someone has hacked into the mainframe and seems to be messing with different machines and areas of the hospital.

Lindy decides to go undercover as a patient at the hospital and gets George to hack into the hospital records to give her a disease bad enough to get her sent to the ICU, which is where most of the hacking traffic seems to reside. When Tommy finally realizes what Lindy is doing she is about to get a painful test done for her disease (George hilariously gives her neurosyphilis), and he comes in to try and stop her by claiming he is her fiancee. The charades results in some funny moments, especially between Tommy and his ex Dr. Wells. But when one of the patients, Erika, dies thanks to her heart machine failing, the hospital starts shutting down completely.

The culprit is discovered, it looks like Erika killed herself with a computer virus she created and was looking to punish the hospital for putting her on a drug trial that messed up her liver so bad that her body was too weak to have a heart transplant. She swallowed the kill switch before she died and it was the only way to stop the virus. Tommy and Lindy go to the morgue to cut the kill switch out of Erika but Tommy is too afraid to do it himself which leads to an intimate Tindy bonding moment (despite the situation being a rather dark and gruesome one).

Thankfully, Dr. Wells comes in time to save the day and cut the kill switch out herself (which is much less disgusting than a cop and a hacker doing it), and Lindy, with the help of the Flirtual killer weirdly enough, ends up stopping the hospital-wide shut down, though we're not entirely sure why just yet.

But Jake's presence is always over them as the episode ended with Jake presenting Lindy with a gift to make up for canceling their date. In the end, who is better for Lindy? And should she really be engaging with anyone at the moment since she has a killer on the loose who is obsessed with her? If it comes down to who can protect Lindy better, the answer is resoundingly in favor of Tommy since he is not only a cop but is extremely keen on protecting Lindy thanks to his feelings for her and his duty to honor his former partner's desires as well. And you know that if Ben had the time to talk to Tommy before he died, he would have wanted to make sure that Tommy took care of Lindy no matter what.

Jake, on the other hand, is far enough away from the Flirtual killer and her other cases with the NYPD, that dating him probably has its own perks, including not having to talk about all kinds of details about all kinds of murders and hacking crimes throughout the city. Plus, Lindy seems to really like Jake right now, and we have yet to see her actually reveal any kind of emotion for Tommy in the short run of the series so far.

We know Tommy is starting to really care deeply for Lindy, but are the romantic feelings one-sided? Plus, can we accurately say that Tommy is not the Eye Candy Flirtual killer? If he is, that definitely hinders their potential relationship, not to mention the feelings of probably many current Tindy fans, including myself. According to promos for the rest of the season, we're looking at getting intimate scenes for Jake and Lindy (or Jindy) fans as well as some intimate and tension-filled scenes (good and bad) for Tindy fans. All we can really do is just wait and see what Eye Candy throws at us, but at this moment, Tindy is looking more and more appealing.