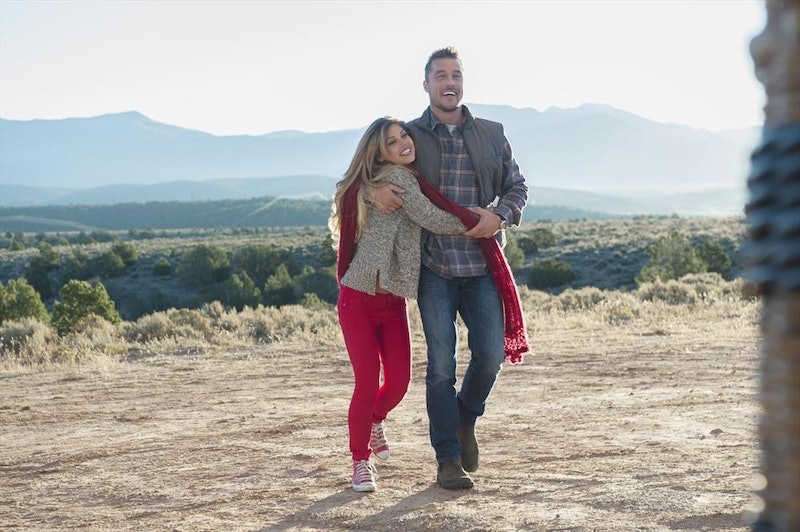 Now that she's been eliminated from The Bachelor, people are debating Britt Nilsson's future Bachelorette chances. But as pretty and relatable as she may be, one thing is going to count very much against her: Chris Soules doesn't seem to like Britt all that much. Obviously, he didn't envision her as his wife, but he also doesn't seem to like her as a person either — even after all the dust has settled.

In Chris' People magazine Bachelor blog, Chris explained his feelings about Britt, and he seems to have a lot of issues with her. Unlike with some of his other elimination blogs, he didn't apologize for sending Britt home, and he didn't throw out any compliments either. To show the difference, here's how he talked about Carly's elimination for example:

Saying goodbye to Carly was very hard. I knew how hard her past relationships had been, and I didn't want to be yet another man to disappoint her. But I had to be true to my heart. Even though I had a great connection with Carly, unfortunately it wasn't as strong as my connections with the other women.

But his words for Britt were not nearly as nice, even though it's been months since he sent her home in real life. Clearly there are still some hard feelings between the two of them. In his blog, he even goes so far as to question Britt's actions and level of sincerity.

I also started feeling like Britt's over-the-topness wasn't fully sincere. It started to feel like she was putting on a performance. And the girls' comments supported that. It was too bad because we did have such a strong connection right off the bat. But truthfully, now I question all of that ... I was thankful that she apologized for the other night, and I accepted her apology. But truthfully, I felt like I was being manipulated to feel like I was somehow in the wrong ... It was very strange. It was as if this whole time she was putting on a show, and she finally got caught, realized I wasn't buying it anymore, and she tried to turn it on me.

Yikes. Sincerity is one of the most important traits a Bachelorette can have, especially if the show wants to avoid another Juan Pablo situation. For Chris to doubt her integrity, and even to go as far as to say he questions their initial connection, that's pretty much the nail in the coffin for her Bachelorette dreams.

The show takes the opinions of their Bachelor Family very seriously. I think Chris Soules landed The Bachelor gig in part because of Andi Dorfman's glowing endorsement of him as a potential Bachelor after she broke up with him last season.

If Chris doesn't even trust Britt, there's likely no way ABC will pick her. She had a good run on the show, and was an early favorite. But you can never tell how things are going to go on reality TV, and, in this case, it seems that Britt isn't the beloved contestant she once started out as.

So maybe she won't be the next Bachelorette, but Britt doesn't seem too upset about how things ended. She took to posting on social media shortly after her elimination episode aired and defended her sincerity saying, "Viewers can plainly see that I tell Chris the truth every time. That speaks for itself and everything else will come and go."

Maybe the title of The Bachelorette will be one of those things to go, but life moves on and I'm sure Britt will land on her feet wherever she goes next. I just don't think it will be on an ABC show.