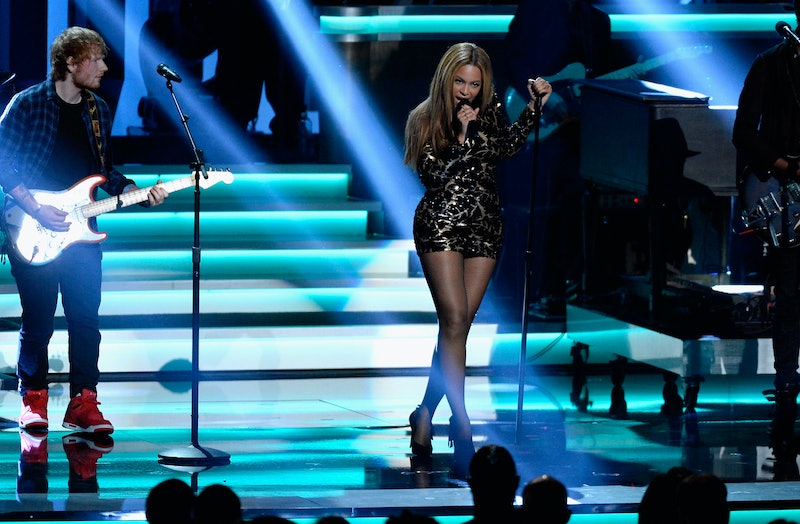 Last week, the music industry gathered in Los Angeles to pay tribute to the living legend that is Stevie Wonder. The timeless music of one of soul's greatest artists was performed by Lady Gaga, Tony Bennett, Pharrell, and Annie Lennox. Amidst all of the big stars, it's no surprise that the one who really brought the house down was none other than Queen Bey. She started off the show with a medley of Wonder's most groove-worthy, get-up-and-dance hits including "Master Blaster (Jammin')," "Fingertips" and "Higher Ground." Beyoncé was joined on stage by Ed Sheeran and guitar maestro Gary Clarke Jr. With fans blowing her hair ever so majestically, Beyoncé brought the entire room to its feet and gave the kind of flawless performance that made Stevie Wonder himself find new life in his own music.

There's no doubt Beyoncé helped get an entire legion of her fans turned on to the music of Stevie Wonder (that is, if they weren't already). The full-bodied passion that was thrown into the performance is a testament to the power of Wonder's music — it just gets into you. What's perhaps even more mesmerizing than Bey (who am I kidding? NOTHING is), are the looks of awe and, yes, wonder, by the star-studded audience.

Here are all of the moments from the tribute that just screamed, "Bow down."

That wasn't an L.A. earthquake; it was Beyoncé.

When Pharrell And Jennifer Hudson Felt The Power

When Tyler Perry Was Speechless

Look at the amazement in his eyes!

When John Legend Forgot About Chrissy Tiegen For Just One Second

Can you blame the guy?

When Jill Scott Was Clearly Having A Religious Experience

When Bey Made Ed Sheeran Blush

Even he couldn't handle the power of Beyoncé.

When This Keyboard Player Lost His Mind

When The Power Of Stevie Brought Bey To The Floor

It's just that intense.

Just give in, there is only one Queen.

When Tony Bennett Was Falling For Bey

When Beyoncé Commanded Tens Of Thousands of People

When Stevie Wonder said, "Wow" at the End of the Performance

Watch the entire performance and get ready to bow down.