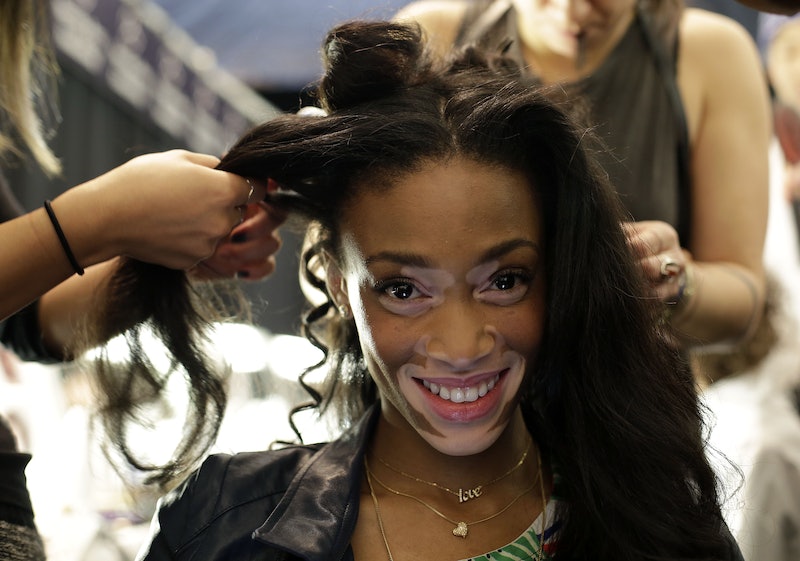 When most of us think of diversity, I'm sure the beacon of celebrating differences that we first imagine is not the runways of Fashion Week. It's probably not high fashion, or even fashion at all — and you wouldn't be wrong. Thin bodies, straight hair and white faces still dominate our narrative of what beauty is perceived to be. Fashion magazines in 2014 were severely lacking in racial diversity and I'm fairly certain I could count on one hand the amount of people who were surprised by this. However, this week in New York, I'm regaining some hope that fashion is seeing the value in casting diverse bodies to walk its runways.

FTL Moda featured physically disabled models; Jamie Brewer strutted down Carrie Hammer's runway filled with "role models"; and Canadian model Winnie Harlow, who has vitiligo, walked in Desigual's show — and this is all for starters. In a letter for the Council of Fashion Designers of America (CFDA), legendary designer Diane von Furstenberg urged other designers to center diversity and health when they were casting this season's models: "We strongly believe that models under the age of 16 do not belong on the runway... Remember, we must consider the emotional and physical well-being of these young women." It's no wonder Mashable is declaring that diversity was NYFW 2015's "unofficial theme." This year's runways were perhaps the most diverse yet when it comes to age, race, physical ability, and gender — so is the problem fixed? Is our work here done?

Many people are calling more diverse runways a "trend" — which is definitely a dangerous label for the phenomenon. If you have a pair of sneaker wedges in your closet, you understand that trends are fickle and change too often. I'd like to see runway diversity stick around and continue to go even further: Casting tokenized models of color is no longer enough to count as diversity, so I think we can continue to push the boundaries of what we consider "the norm." Diverse imagery needs to be the rule, not the exception. I want more people to be able to recognize themselves and see a part of their identity represented on runways and in media. I want a truly diverse array of body sizes to be seen. I mean, so far only two plus-size models have ever walked the runways at NYFW. And I don't want us to have to keep asking black designers about the lack of black designers. We're still waiting to see the diversity on the runway trickle down to diversity in big box stores and clothing chains.

Ultimately, we have a long, long way to go from Fashion Week stunts to daily representation. So we need to see designers feature diversity in their shows and campaigns all year long. As Styleite points out, we're right to be suspicious of the motives of designers and fashion houses:

"It’s easy to be hesitant when fashion makes such an obvious attempt to be more inclusive. These are images that are intrinsically share-worthy, and when 99 percent of fashion shows are experienced through photographs and social media, anything to increase clicks is fair game."

Regardless of designer intentions, if the result is seeing more diverse imagery, it feels hard to complain about this progress. But it also doesn't make it feel difficult to ask for more.