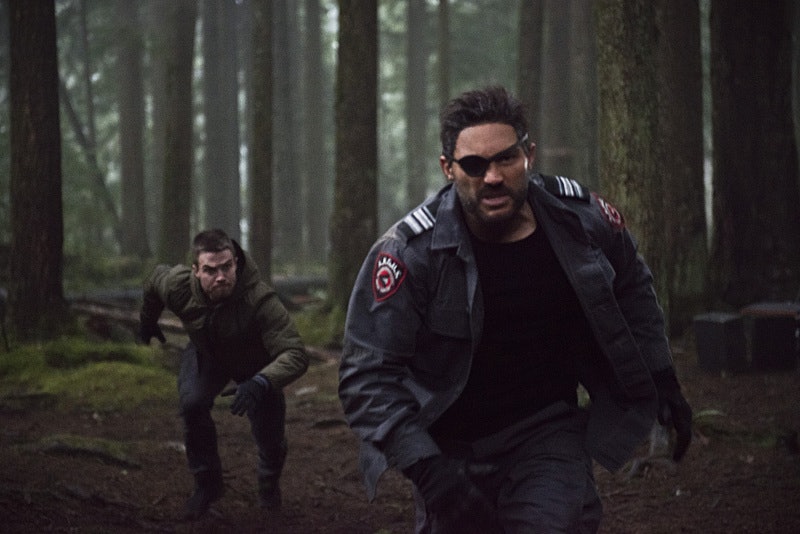 Wednesday's episode of Arrow brings Oliver Queen back to a very familiar location: Lian Yu. Not only that, but he's got his younger sister Thea in tow for what I'm sure will be a fun-filled family vacation. Doesn't really sound like the trip of a lifetime, but hey, the Queens do things differently than the rest of us. Though these two might not have a detailed itinerary for their stay on the island, they will most definitely come across Deathstroke, who's been locked up there since last season's end. Sounds like just the R&R Oliver and Thea needed. However, in all seriousness — and for the safety of these two siblings — is there any way Deathstroke could escape on Arrow?

While it seemed like a really good idea to lock Deathstroke — also known as Slade Wilson — away on Lian Yu, it also meant that we would probably see him again. Considering how strong of an attachment Oliver has to Lian Yu, even though the island basically tried to kill him, we knew he'd return back there eventually. And considering his longstanding history with Slade, we knew we'd see him again, too. None of us probably thought he'd be crashing the Queens' vacation, though.

The reason Oliver and Thea are on Lian Yu in the first place is because Thea needs to be trained, and prepared, to fight Ra's al Ghul. And what better place to do that than a remote island filled with booby traps? It's also appears that Malcolm Merlyn pulling the strings behind this little vacation, so you know he's going to do something stupid. Like, say, release Deathstroke into the wild.

From the promotional images released for Wednesday's Arrow episode, "The Return," it shows that Deathstroke is out and about — and fighting Thea. Unless this is all a giant hallucination, we know he's somehow gotten out of his ARGUS prison cell, and is roaming the island. More than likely, it was Merlyn who released him, in hopes of pitting a real life fighter against the siblings.

The episode's description strongly suggests that Merlyn was the one to release Deathstroke, as it reads, "Malcolm puts Oliver and Thea in a dangerous situation that lands them on Lian Yu with Oliver's former enemy Deathstroke." Of course he does. There shouldn't be any doubt in fans' minds that Deathstroke could escape his ARGUS prison without anyone's help, but I bet Merlyn helped to speed everything up a little bit so that Slade is already out, waiting for the Queens' arrival.

The only thing left to figure out is if Oliver and Thea will be able to get Deathstroke back into his prison, because I'm sure he won't go willingly.