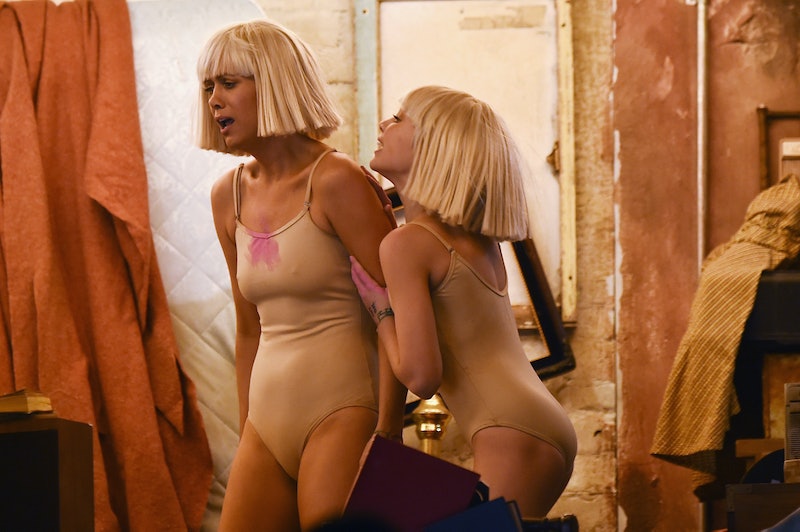 If you watched Kristen Wiig's dance performance of Sia's song "Chandelier" at the 2015 Grammys and found yourself wondering whether you were supposed to be laughing or taking it seriously, don't worry, you're not alone. Everyone I spoke to the next day was like, "I think I liked it? Was I supposed to like it? Was it funny? Help." And it's hard to know the answer to any of those questions, because there was a whole bunch going on. Not only was Sia turned around with her back to the camera while singing, but there was 12-year old Maddie Ziegler bouncing around like always, mesmerizing us, and then all of a sudden there came one of the funniest ladies ever to grace our television screens. It was a lot to take in.

But luckily, Sia's choreographer Ryan Heffington is here to help you parse through it. He did an interview with Vulture on all things Sia, and finally laid it all out for us about whether or not we were supposed to take the Grammy performance seriously or laugh at it. Turns out, a little bit of both.

What I loved about her was that she was so dedicated and she really wanted to do the absolute best job ever. She’s really eager to rehearse and eager to get everything right. She took direction so well. It was just nice to have her express herself through dance. She was very connected to her body — physically and emotionally. I thought she was incredible.

So on the one hand, she really was giving it her best, and I think that came across. I was pretty impressed, honestly, at how sharp and expressive her movements were. But on the other hand... you better believe they were cracking up during rehearsals.

We laugh all the time. It’s a job, but I’m there to have fun while I work, and Kristen’s hilarious, so it was a magic gig. Everyone was having fun. Maddie had a great time. We were just playing a lot. We became really close.

And there you have it! Everything you're feeling is acceptable! What a relief.