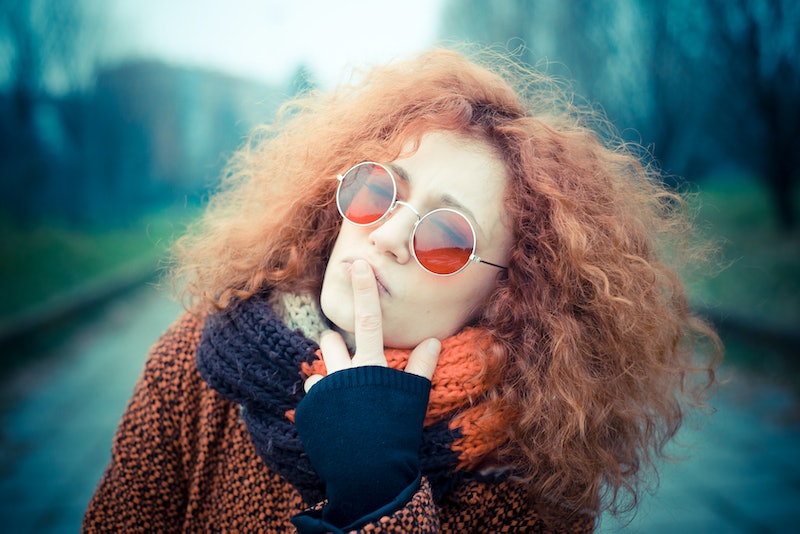 Do redheads come from another planet? Do they have super powers? These aren't uncommon questions thrown around at the ginger community, so I decided to read up on our flame-haired friends and let you in on a few scientific secrets about these mysterious people. I have never considered myself a proper redhead because my sister Sarah's locks are undoubtably redder than mine (her friends fondly call her Red — but not in like, an Orange is the New Black kind of way). That being said, people who know me and not my sister consider me to be pure ginger. And either way, I am aware of a certain amount of discrimination against us, which makes my mind boggle just as equally as any other discrimination. According to the Facebook event page for National Hug A Ginger Day:

"In 2008, a Facebook group was made in Canada entitled 'Kick a Ginger Day.' The inspiration for the group came from an episode in South Park called 'Ginger Kids.' Thousands of redheads were kicked, hundreds of arrests were made. A brave redhead took over the group, and changed the name to 'National Hug a Ginger Day.' There is talk of 'gingerism' being the latest form of accepted discrimination. On February 22nd, hug a ginger. Stop the discrimination. Be happy... and eat good food."

There are several projects such as this one in existence at the moment. In Breda in The Netherlands they celebrate Redhead Day, with more than 5000 gingers taking over the city for a two-day festival. Other projects surrounding redheaded-ness cause me to furrow my brow somewhat, but here you can find a list of great things that redheads have achieved in the world and why they are awesome. I get a bit uncomfortable if someone starts to explain why people with one physical trait are better than others. However, there are some scientifically proven things that our red-haired buddies have that we don't. So I've collected a few interesting facts for you:

1. Redheads Don't Turn Into Vampires When They Die

I know, I know. We all thought this one was true for sure, because how else can you explain redheads' extreme aversion of the sun? Deathly pale skin and blood red hair coloring? Most of you will have heard this scientific theory on South Park, but the initial idea came from Ancient Greece.

2. They Haven't Had It Easy

Redheads have also been accused of being evil gods, devils and witches. The list of haters includes Ancient Egyptians, Romans and Greeks, Aristotle, Hitler, the media — and it goes on and on. I'm not sure where this comes from, but I'm guessing it's a minority thing? So be nice next time you're talking to a redhead; maybe even give them a hug. That would make the world a better place, considering hugs are the best.

3. Technically They Are Mutants

The gene that causes red hair (which is recessive) comes from the MC1R — which is a genetic mutation. Movies have lead me to believe that this also means that redheads have hidden mutant super powers, right?

Mutant genes apparently like to hang out together, so if you have red hair you are more likely to be left handed. My sister is left handed and has red hair — double mutant! (I wonder if she has any special powers?)

5. Redheads Are More Sensitive To Temperature

Now I have the perfect answer next time one of my colleagues asks me why I still have my coat on two hours after arriving at work. It's because of my hair color, obviously! I can't stand the cold — it kills me — and I go to great lengths to keep myself protected from the cold. I can also confirm problems with the other end of the temperature scale, because I can't handle being too warm. No cosy spooning in front of the fireplace for me!

Red hair color can fade to blonde or white but it will never turn grey. I'm so curious about this one, but I have to admit I have noticed a few stranded greys of my own. I'll check with my sister in 50 years time and let you know.

7. Everything Hurts Them More Than It Hurts You

Redheads need on average 20 percent more anesthetic than dark-haired people, so think twice next time you brush off a seemingly tiny redhead injury. We're not just being dramatic; it really does hurt more!

8. Scotland And Ireland Are Winning The Competition

About 13 percent of the population in Scotland is redheaded, and in Ireland this figure is around 10 percent. These stats are way above the world average, hovering at one or two percent. A possible reason for this higher concentration is due to the location (in cloudy climates there is less need for protection from the sun).

9. Redheads Have Less Hair On Their Heads

So I haven't actually counted (and I would consider myself to have really thick hair), but my sister (the proper redhead) indeed has really thin hair. Apparently fire balls are better able to absorb sun through their heads, because they [usually] live in a cloudy climate, remember? More about the sun thing coming right up:

10. They Are Better At Generating Vitamin D

If Ireland and Scotland are famous for one thing, it is for their beautiful green fields. As I always say to people who compliment me on my ancestors' grass: "It's green because it always rains." The cloudy and rainy weather in that part of the world means that not much sunlight gets through, and we need outdoor sun exposure to avoid a Vitamin D deficiency (which can lead to weak bones or even osteoporosis, cancer and heart disease). The redheads in cloudy, grey climates are better at absorbing sun to product Vitamin D than people with dark hair — which means we are at less risk of osteoporosis but (and I bet you saw this coming) more risk of skin cancer.

11. They Are Not Going Extinct

This rumor has done the rounds a few times and I am happy to tell you it is not true. Even though redheads only make up about one or two percent of the world's population, people carrying the red-haired gene are far more in number. So as long as Irish people keep emigrating to all ends of the world, the survival of the redheads is ensured.