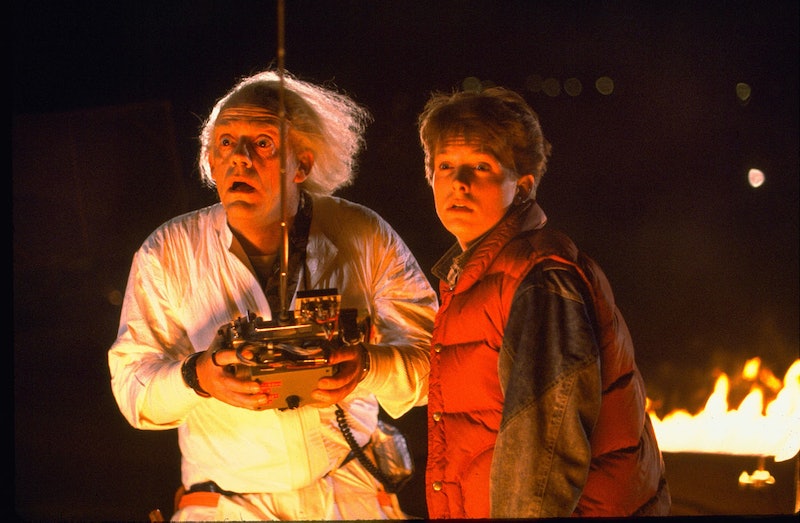 The future is now — at least, according to the Back to the Future trilogy. In case you're in desperate need of a franchise re-watch, in Back To The Future Part II , we see our heroes Marty McFly and Doc Brown head 30 years into the future (which, at the time of the film in 1985, was 2015). Unfortunately society as a whole has come up just a tad short compared to director Robert Zemeckis' vision — mainly in the hoverboard department. But while we may not have the ability to fly on our skateboards, the Back to the Future Facebook page is promising fans something awesome: The official Facebook page just released a poster with the hashtag #BTTF2015, and right above the hashtag is an extremely cryptic slogan that states "The Future is Coming."

"BUT WHAT DOES IT MEAN?!" That's what fans on the Facebook page are asking, and one common theory is that it means that the filmmakers will announce a remake of the iconic '80s flick. Considering the love for the original trilogy, it's not a surprise that producers would want to take advantage of the cultural phenomenon — after all, even people opposed to the idea of a remake would want to see it to make sure it's just as bad as they imagined, right? A Back to the Future reboot is a huge idea, and it could certainly pay off.

That's not to say it would be an easy task to take on. A shot-for-shot remake of Back to the Future couldn't work — especially when it comes to the second film, which takes place in our present day. If the producers of the film really want to make Back to the Future happen again, they'll need a brand new concept and script — one that makes sense given our modern society. That, or we'll have to spend plenty of time in the past, which isn't nearly as fun as heading forward into the future.

I could take or leave a Back to the Future remake. Nothing will ever replace the original, but if the powers at be want to expand the trilogy's universe, well, I'll buy a ticket.