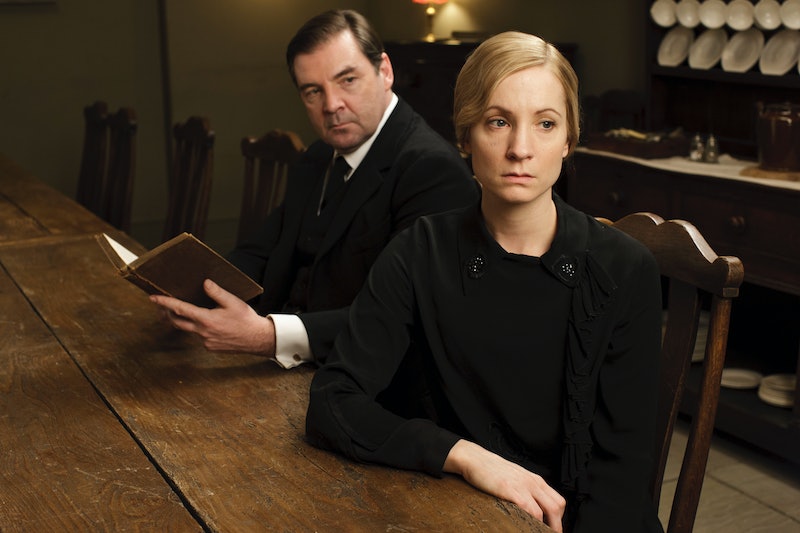 Thanks, Downton Abbey for continuously putting John and Anna Bates through the wringer. Can't these two just be happy? I guess it's not enough that Bates already went to jail and Anna was sexually assaulted, not to mention the two are still working through that awful time. There's also the part where Anna will be affected by Mr. Green raping her for the rest of her life. So of course it makes sense that Anna is arrested for Mr. Green's murder. Let's just add it to the long list of unfortunate events these two have experienced. With that said, one question remains: Could Anna be convicted with a witness statement and nothing more?

Let's think about this. It doesn't seem likely for Anna to stay behind bars. First of all, it's Anna, and I find it hard to believe the show would keep one of the most beloved characters of the series in prison. However, the odds don't seem to be in Anna's favor, including the fact that there's a witness. Also, Anna doesn't seem to have an alibi. Unfortunately, it seems more likely than not that our beloved, sweet Anna will be convicted for Mr. Green's murder. Will she stay there forever? I don't think so. What will prove her innocence? I have no idea. At this time, Anna better hire Annalise Keating or Olivia Pope to help her out.

I hate to even think it, but here are a few reasons why Anna will probably be convicted (even if Bates does try to come to her rescue and take the blame).

A Lot Of People Know About The Rape

As we all know, Bates, Mrs. Hughes, and Lady Mary all know about the rape. I highly doubt that any of them would reveal the sexual assault or use it to convict Anna, but it could turn out to be a bad thing in the end, especially if it's forced out of them somehow.

Too Many People Know Something Is Up

Not only did Baxter make the Anna/Bates/Green situation worse by answering some of Scotland Yard's questions, but Thomas also suspects something. Also, Mary asked Tony to fire Green, aka his former valet. Tony has to wonder why. Even though he and Mary are no longer together, I doubt Tony would throw Mary or Anna under the bus (too soon?). However, the more people suspect something, the worse a situation gets.

First of all, who is this witness? I have to assume it's the man who identified Anna in the lineup was in the area when Mr. Green was "pushed" to his death. Per this witness, he was even able to give details that Green's murderer is shorter than Bates. Whether he actually saw Anna, I don't know, but this supposed witness testimony doesn't bode well.

Anna Doesn't Seem To Have An Alibi

Where was Anna at the time of Green's death? Was she at Downton? Was she in London? Seriously, where was Anna? Well, I'm sure the police are asking the very same question.

Most obviously, Mr. Green raped Anna. The police have yet to learn that information, but they do know that Green's sexually assaulted women before. If they discover Anna's secret (remember she already avoided the topic with the police), that will make her look guilty. Plus, Anna did go to the scene of the crime, which might look like she's returning to the place where she committed the murder.

Overall, this is just one big mess, and at the moment, there seems to be more against Anna, even if it all seems like a loose case.