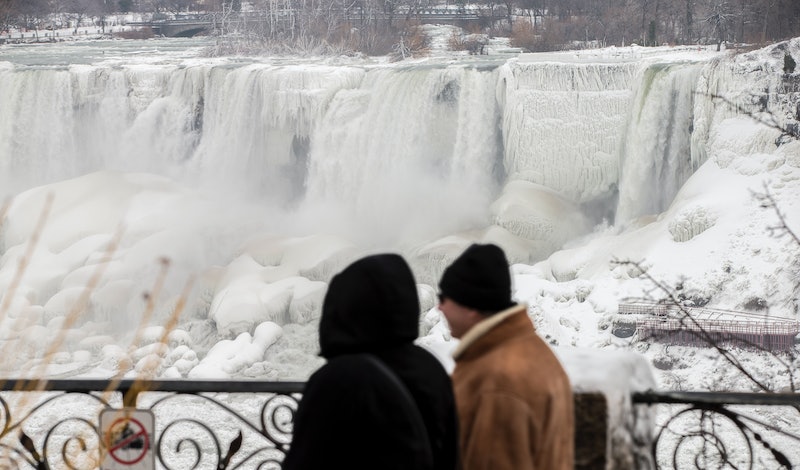 It's been a frigid winter, and nature continues to provide physical evidence that it's as blindingly cold as you think it is. No, Mother Nature certainly isn't pulling any punches this go-round. Lake Erie is almost completely frozen over, a phenomenon seen only during three other winters, and now Niagara Falls is attempting its best Lake Erie impression. When temperatures dipped down to -13 degrees, Niagara Falls began to freeze, counter-productively icing itself. And, really, it can't help it. The mix of water, mist, and abnormally cold weather caused a solid sheet of ice to form around large portions of the falls. Those sheets of ice are just solid enough to ascend, which Canadian climber Will Gadd proved by becoming the first person ever to scale the frozen Niagara Falls.Gadd's exploits are an expert kiss-off to the brutality of weather that gives you wind chills of -25 degrees and hypothermia for your troubles. Those who aren't much for the outdoors (well, in this weather) need only to head over to Ithaca, New York, for a little assurance that there are truly warmer places to seek asylum. Their tourism board has all but given up on selling the freezing cold of upstate New York in a clever ploy to spare visitors from experiencing single digit temperatures. If you head over to Ithaca's tourism website, you're met not with images of their myriad waterfalls and state parks, but a pop-up featuring beachfront scenes from Key West. "Please come back when things thaw out. Really, it’s for the birds here now," VisitIthaca.com implores while also pointing you in the direction of the prettiest parts of Florida, which really is not that bad of an idea.

Still, for all the cold weather to be had, snow days to suffer through, and cars to be shoveled out, there's something serene and beautiful to a quiet, frozen scene such as Niagara Falls freezing over or Lake Erie turning to ice. The constant rushing of water is majestic in its own right and the pearly sheen of layers of ice only adds to its mystique. It's not every day one of the most naturally beautiful locations on earth gets even prettier due to inclement weather. This is the silver (well, off-white) lining to a season that the whole nation wishes would just end already. Barring Punxsutawney Phil's terrible prediction, winter might be over sooner than you think.