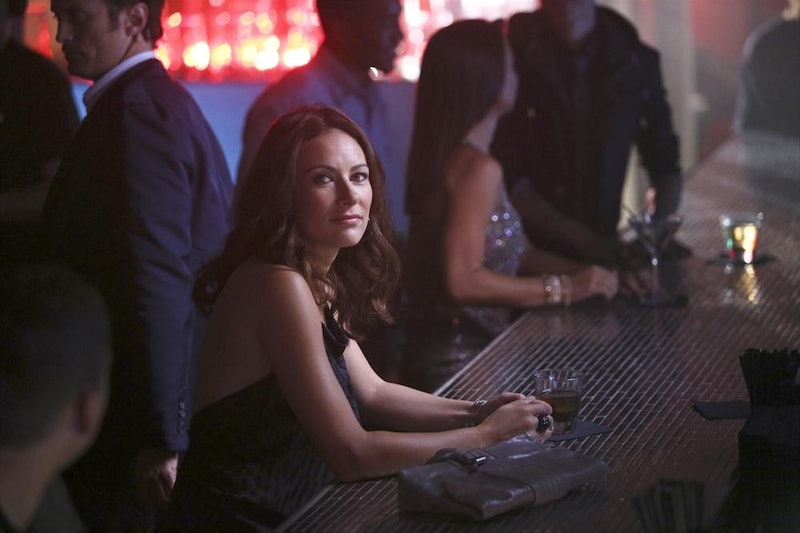 This season on Nashville, we learned that new-to-the-scene crooner Sadie Stone is running from a serious problem: her abusive ex-husband, Pete. Before the winter break, Pete had finally found Sadie (played by Broadway vet Laura Benanti), showing up at her house to demand royalties from all the music that they had allegedly written together. He hightails it out of there soon after, but not before violently punching her in the face, leaving her bruised and filling out papers for an order of protection.

After Pete gets the paperwork, he plays with Sadie’s mind, eventually serving her with papers and a handful of thinly veiled threats. All of these tactics squash Sadie’s voice: She can’t even record her album with Avery because she knows that Pete is outside the studio waiting for her. Thankfully, she eventually tells Avery what’s going on, causing Avery to run outside and confront Pete. It is here that Sadie finds her voice again, screaming at Pete to leave because he is violating the protection order she filed against him, and it’s all on the security cameras behind him. Sadie is now able to sing her song.

Obviously, this storyline is far from over: Domestic violence can never be wrapped up in a neat little bow. What’s interesting in Sadie’s story is that her music is both her undoing with Pete and her empowerment against him. Pete is only in town to get the money he feels is owed to him now that her music is popular: If Sadie wasn’t a successful singer, perhaps he wouldn’t have bothered to follow her. As Pete intimidates her into submission (or so he thinks), Sadie stops singing, squelched by this man who has done her so much harm.

But once Sadie tells Avery what’s been going on, sharing her story and amplifying her voice, she is able to sing it out, both literally in the studio and figuratively in telling Pete to get the hell off of her lawn. Sadie’s music is inspiring her to fight back against her abuser. Let’s just hope he gets out of town sooner than later.