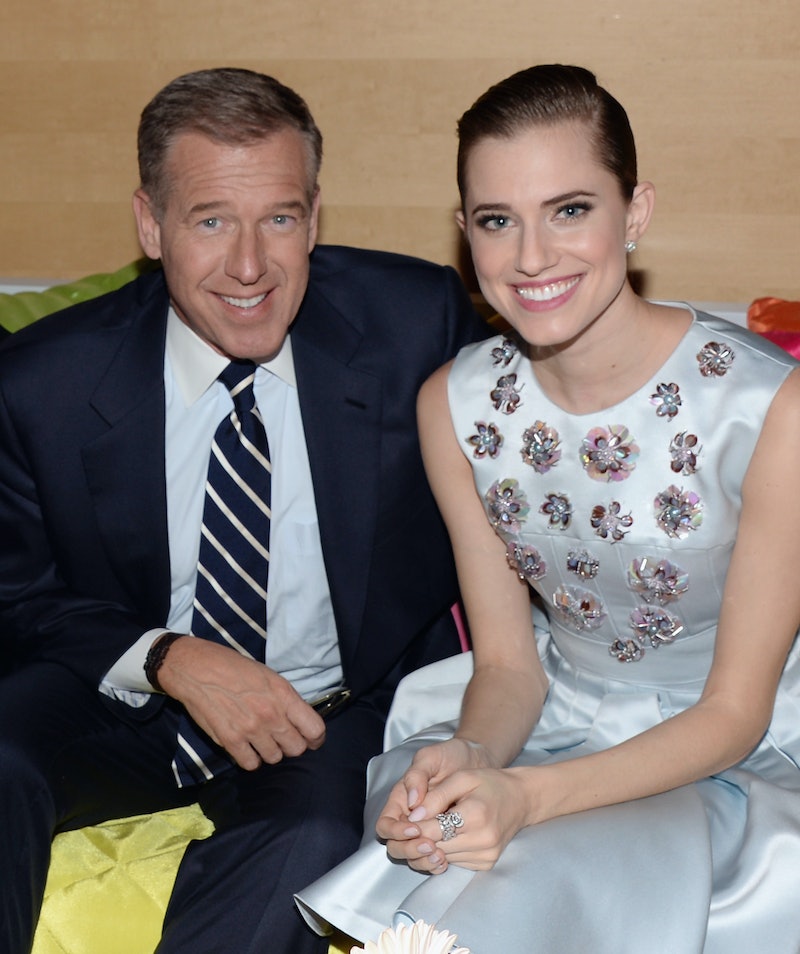 Fans of Brian Williams have been having a rather tough time lately, as their faith and trust in NBC Nightly News host who is famous even among people who don't loyally watch the news due to Jimmy Fallon's Slow Jam The News covers has been shaken. Saying it has been tested would be an understatement; no, the news anchor is under fire for embellishing an Iraq war story in which he claimed to have been in a plane that was shot down, a story later revealed to have never occurred. People have responded with disappointment, outrage, and #BrianWilliamsMisremembers hashtags, but one person who is feeling neither hurt nor betrayed at this moment is the NBC host's daughter, Allison Williams. In fact, according to Us Weekly, Allison Williams spoke in defense of Brian Williams and is begging for the public's understanding.

Anyone who didn't learn that Brian and Allison Williams are father and daughter long before now must not have been around for NBC's Peter Pan Live, or the episode of NBC Nightly News during which Brian displayed a picture of Allison dressed as Peter Pan when she was a baby in order to show off how proud he was of her daughter for truly achieving her dreams. (So, basically, Brian Williams is every embarrassing dad ever — but with a TV show.) It's adorable moments like that which make Allison's staunch support of her father seem completely understandable:

"This has been a really hard time. We have also been very lucky, counting our blessings. We have our health, we have each other. It's been incredible to experience the outreach from people you love, family, friends, and then people we don't even know, strangers, just reaching out saying we want him back on TV... It's been tough, though. Obviously, toughest on my dad, who bears the full burden of responsibility for it, but one thing the experience has not done is shake my trust and belief in him as a man. He's a really good man. He's an honest man. He's a truthful man. He has so much integrity. He cares so much about journalism. And yes, he's a really good dad. I know you can trust him because, as any good daughter does, I've tested him on that."

Whether this sways you to Brian Williams' side or not, the fact still remains that this was an incredibly sweet moment from the famous family pair. It's just a difficult argument to accept because the problem is not with Brian's character. As angry as people might be, I think there are relatively few of them who are doubting that the former news anchor is a good person. Even NBC only suspended Brian for six months without pay rather than outright firing him from his job; they love him, the people love him, and that's what made this moment such a shocking betrayal. The problem is with Brian's integrity, which is so staunchly defended by Allison, and in expecting the people to have the same level of trust in him as they did prior to this scandal.

Even if Brian is accepted as a news anchor again, it's quite likely that people who have even a passing knowledge of the current controversy will find themselves fact checking every story that he reports from here on out. His integrity as a journalist has been forever called into question, and being a good person can't make up for that. It's great to see a daughter sticking loyally by her father and supporting him as he has always supported her, but this issue is a serious one that can't be waved away on Allison's support alone.