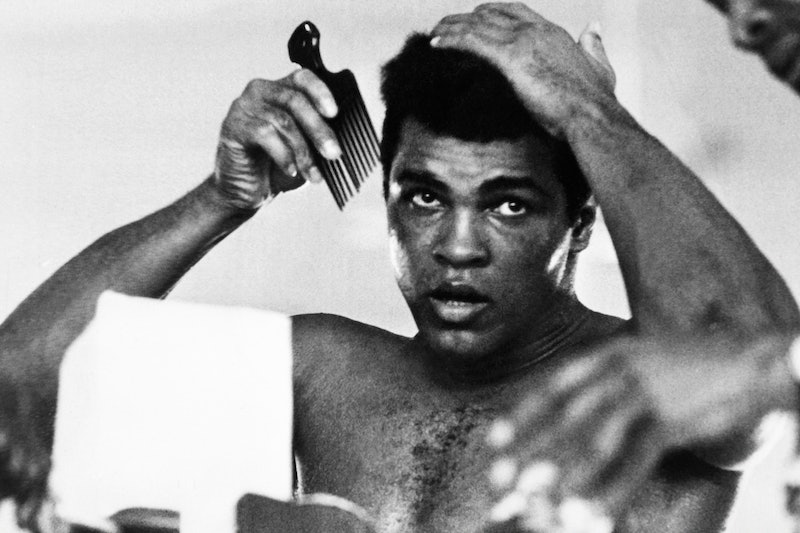 Here is some good news for the dude in your life who cares about what he wears when working out — Under Armour is launching a Muhammad Ali lifestyle collection that begins with a graphic tee and continues to roll out in March. In November, the quippy boxer's name and image will be used on and will inspire training apparel, shoes, and other assorted accessories, according to ESPN.

While I normally only wear Under Armour pieces when I am doing something exercise-y, my nephews love the brand. And while I totally get why Muhammad Ali is the right choice for such an endeavor and a range, given the charisma and skill he displayed at the height of his fame and talent. It won't be typical.

Even though Ali hasn't stepped into the ring for a boxing match in over 30 years, he remains a prominent, iconic, and instantly recognized figure in our culture and he is remembered for how he delivered zinger after zinger. Who else could float like a butterfly and sting like a bee?

But I can't help but think of more than a few female athletes that I'd like to see partner up with Under Armour (or any active brand, really) for a fresh capsule or a range that is super specific to physical activity.

While the brand has been making great strides in the area of female-inclusiveness (remember that stellar "I Will What I Want" campaign that launched this summer?), but there doesn't need to be an endpoint! Female athletes are badass and not every ath-leisure line needs to be ready for the street like Stella McCartney offerings. It's totally fine to wear pieces to the gym and that's, like, it.

Yes, it's obvious, but how about Muhammad Ali's daughter, Laila, herself a retired boxer? She has a hair product line, but she could certainly offer some insight on critical pieces that allow for comfort and that absorb sweat during really rigorous physical efforts!

I'd love for the skier to do a line of accessories only, such as a varity of knit caps, ski googles, scarves, and that's it! They could be for the serious skier or just the novice that wants to look good on the slopes (or the kiddie hill). Vonn is already a long-time fan and spokesperson for the brand, so this would be a natural partnership.

Who cares that the Russian tennis ace is long retired? She was always a girl crush, especially during her heyday, and I think she could totally design a line of tennis dresses and skirts for young girls just getting into the sport. It's obvious, of course, but who would know better? Who? Exactly.

The Olympic gymnast has a leotard line, but that's so niche for girls who are interested in gymnastics or dance, so it doesn't really translate to mass market. She could totally do a line of workout wear that banishes the velour tracksuit forever.

The fierce ballerina was the first non-traditional athlete to feature in an Under Armour campaign, so it only makes sense that she'd be a great pick for an apparel collaboration. Maybe some dance-appropriate clothing that features heavy-duty performance elements as well?

So while Muhammad Ali, his face, and his phrases are certainly marketable with apparel, I think these ideas are equally rad for gym-driven wear!