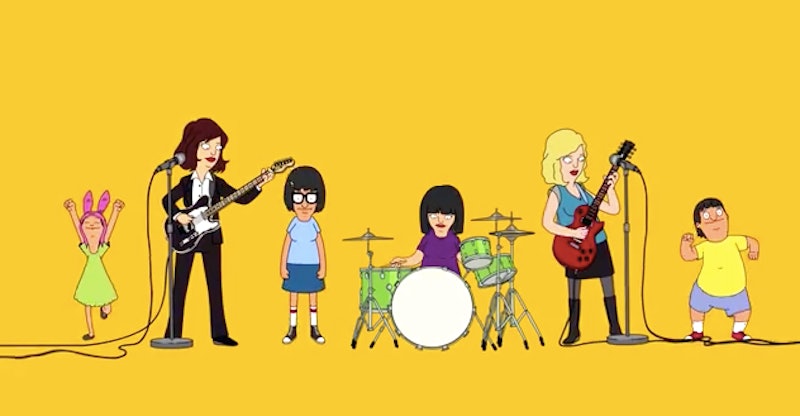 Every day I find new ways to love Sleater-Kinney, but this takes the cake. Earlier today, Sleater-Kinney released a new video for the song New Wave, which guest starred the cast of Bob's Burgers . Yeah, that's not a joke, I didn't short-circuit mid-article. Tina, Gene and Louise are full on rocking out with animated Corin Tucker, Carrie Brownstein and Janet Weiss. And OF COURSE it's a match made in heaven, because Tina IS the new wave of riot grrrl.

At 13-years-old old, an age where most of us all feeling uncomfortable in our oil-slicked skin, Tina owns every ounce of her weirdness, and proudly. She is unflinchingly unapologetic about her sexuality, attracted to everything from zombies, 25 baseball players (at once) or Australian firefighters holding puppies in a casual setting. She's self-confident, identifying as a "smart, strong, sensual woman," yet endearingly humble. Rest assured, she puts her bra on one boob at a time, just like anybody else.

And why does this mark of strangeness matter? In previous interviews, Sleater-Kinney has talked about how this album, and the majority of their work, has been characterized by a sense of otherness. Brownstein told NPR back in November,

"I think in all of the creative pursuits I have I feel like it's an exploration of otherness and feeling like an outsider and creating work that's strange and unusual that goes along the periphery for people to find if they need it."

In short, Tina exists as nothing we've ever seen before from television, just like Sleater-Kinney exists as nothing else we've really seen in music. "New wave" talks about "inventing our own kind of obscurity," and that's what Tina does best. If she isn't a revolutionary chick, and a true modern riot grrrl, I don't know who is.

Well okay, this only could've been made better by a last minute cameo of Lisa Simpson, because who better would understand the use of satirical lyrics to intelligently fuel a feminist discussion? But I'll take what I can get.