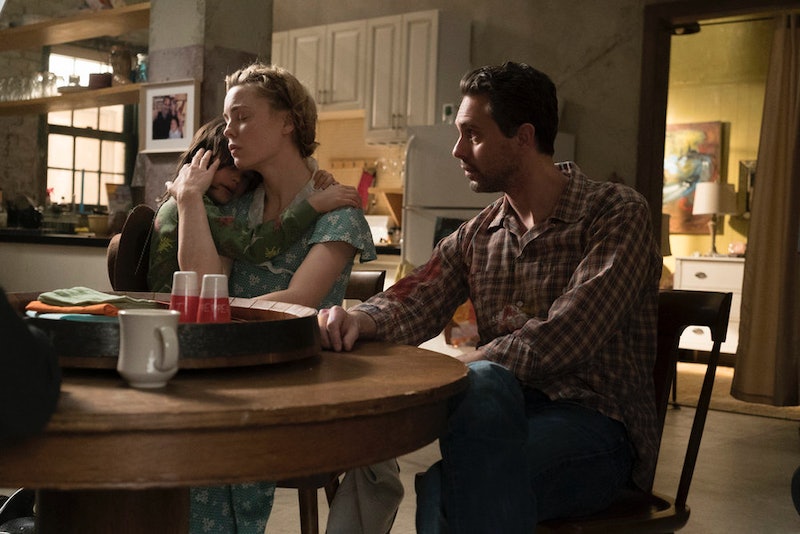 In the preview for the Feb. 26 episode of The Slap, Uma Thurman's character Anouk said that five-year-olds get slapped all of the time. Besides the disturbing message behind that, I took away the fact that Hugo is five-years-old — so why is he being breastfed on The Slap ? Nothing stops people in their tracks faster than a mom breastfeeding in public. While I am in full support of mothers breastfeeding their children, when that child is five-years-old, we've got a (social) problem.

The Mayo Clinic says that babies are usually weaned between two and four-years-old worldwide. This "extended breastfeeding" may be more rare in the U.S. (or in public), but it does make me feel a tiny bit better about mom Rosie still breastfeeding her son Hugo on The Slap. Beyond the social taboo of breastfeeding beyond a toddler age, the act of breastfeeding gives us insight into the dynamic between mother and child on the show. (It's not like we saw the breastfeeding once — it's been three times in two episodes.)

Anouk described Rosie during the Feb. 19 episode as "fragile and haunted." She has an intense bond with her son — and I'd go out on a limb and say it's a bit too intense. He is coddled by his mother's side (beyond the breastfeeding), but then allowed to run rampant and terrorize a birthday party with no discipline. Yes, of course, he shouldn't have been slapped by a random adult, but this child is a terror — and I have a feeling that the breastfeeding isn't helping.

Yeah, I think it's a cheap way to show us that Rosie is unconventional (as Harry would say, she's a "hippy") and possibly needy, but the ploy did make me question her parenting skills more. That might not be fair and if I were to meet a woman who participated in extended breastfeeding, I'm sure I could have compassion and understanding of the situation. But in the case of the monster-child Hugo, I'm going to go back to my high school parenthood ed teacher's advice on breastfeeding: "If the child can ask for it, it's probably time to give it up."