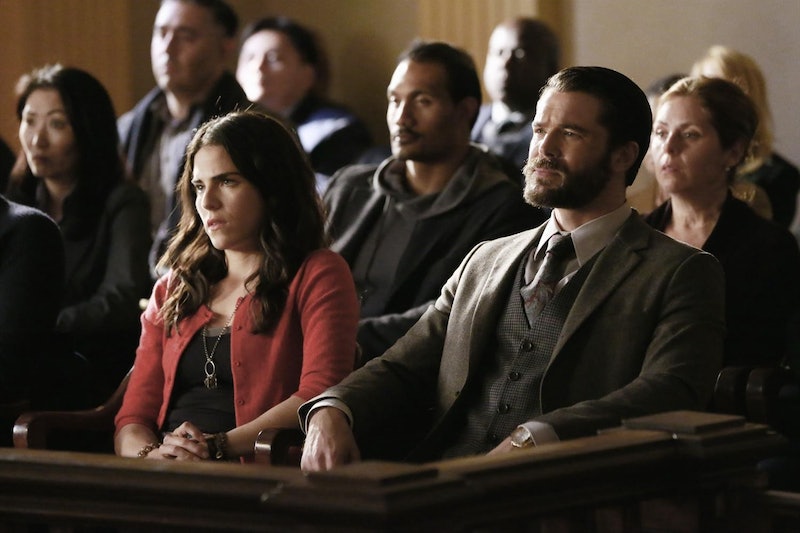 Sam Keating may be dead and Nate Lahey may be locked up for Sam's murder, but the Lila Stangard case that started all this mess is far from over. Tonight marked the first appearance of Rudy Walters on How To Get Away With Murder, and he brought some new information with him. Rudy used to live in Wes' apartment and had "crazy monkey sex" that presumably left the huge scratches on the wall. He was Rebecca's neighbor while Lila Stangard was living and, according to recent developments, left town without even giving his grandmother a forwarding address.

We know that Rebecca called the cops on Rudy and he was sent to a mental institution due to his "nervous breakdown," which as you remember is the same phrase Rebecca used to describe him in the pilot. However, Wes smelled something fishy and looked into Rudy's arrest. He discovered that not only had Rudy actually suffered a drug overdose but he was arrested on the same night that Lila Stangard was murdered. Why has Rebecca never mentioned this? We know she likes to like and screw with people but that would have been her alibi for Lila Stangard's murder. Why has that not come up yet in the trial?

At the end of the episode, Wes and Laurel posed as Rudy's relatives in order to visit him in the mental institution. What they found was chilling as ever. Rudy rocked quietly on his bed and played solitaire. He seemed too jittery to speak. There were scratches above his bed that matched Wes' apartment. Curious. It was only after Wes showed him a photo of Rebecca and asked if he recognized her that Rudy said a single word — "wet."

We are lead to believe that this is referring to the water tank where Lila Stangard was found. Wes thinks this means that Rebecca might have killed Lila after all. That would not be ideal, as it would render everything that Wes has done meaningless. I have to admit, the fact that Rebecca tracked Wes' cell phone and learned that he was at the hospital does not look good. However, I still think it's possible that Rudy killed Lila. Maybe Rebecca sent him to the hospital in order to protect him. Maybe, like Sam Keating's passing, the murder of Lila Stangard was a joint effort between Lila's boyfriend Griffin, her mysterious friend Rebecca and the nervous neighbor Rudy. There's clearly more to this story and I can't wait to see what happens next.