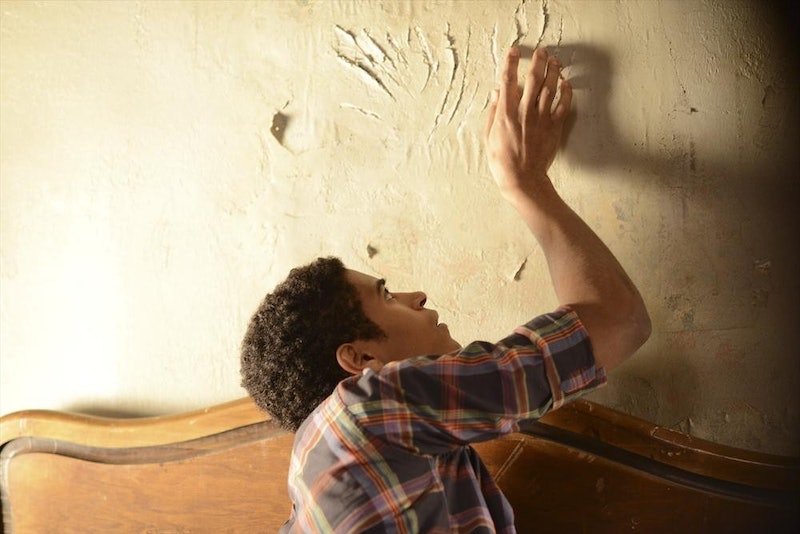 The How to Get Away With Murder winter finale was barely a week ago and I am brimming with questions and anticipation for more. We now know who killed Sam: It was Wes in the study with the trophy and a little assistance by Michaela in the hall with the staircase. However, the final scene in the episode revealed that there's still plenty that we don't know about that night and about the situation in general which brings me to a long-burning question: why are there scratches above Wes Gibbins' bed on the wall and on his head board?

Of course, that's just one of many questions: How much does everyone know, and when? Who was that beard Bonnie met at the bar? Did Annalise orchestrate this whole thing all along? Did Sam's ugly fight with Annalise and demonic eye-flashing while he was choking Rebecca confirm that Sam killed Lila Stangard, or are there more secrets to learn there as well? Where's Michaela's ring, Frodo? We still haven't seen what happens when Sam wakes up after his fall. Could Rebecca have had more to do with it?

And that's why I think those scratches above Wes' bed are so important. I'm still suspicious of Rebecca Sutter. Just as I was previously suspicious of Michaela for being more shook up than the others (and now we know why), I am keeping my eyes on Rebecca for being way too calm. There are many unanswered questions surrounding the bartender. One of them involves our murdering hero. Who was Rebecca's neighbor before Wes moved in? That neighbor could lead us to the origin of those mysterious scratches — and considering that both Annalise and Wes have inspected these scratches, they have to mean something...

So, what do we know about Rebecca's former neighbor?

It's not a lot of information, but it's enough to be significant.

Does The Neighbor Know Annalise?

I still think the scratches have something to do with Lila Stangard.

Do The Scratches Connect To Lila's Murder?

Sam's guilt just takes the focus off of Rebecca and Griffin, who were mighty suspicious before and after Sam came on the scene. Charlie Middleton lived there while Rebecca was friends with Lila, and presumably when Rebecca and Griffin hooked up as well. If that neighbor didn't know something, he saw something. What if the neighbor was someone we've already seen? What if it was Kan, Laurel's Legal Aid boyfriend?

In the episode "Freakin' Whack-A-Mole," Annalise inspected the scratches herself. The fact that we've drawn attention to them in two separate episodes all but proves their significance. I still think it's some sort of sick homage to Silence of the Lambs . However, they don't necessarily look like fingernails. They could easily have been carved by a knife. What if Charlie Middleton is a murderer himself?

Perhaps and I might be reaching in the dark here, and the scratches have nothing to do with Lila Stangard or Sam Keating. What if, instead, they are setting up a new big case for the second half of season one and leading into Season 2? That would involve Wes and rest of the gang without necessarily implicating them in the murder... yet.

We do need a new mystery, and if Wes' apartment is investigated for a new crime while he's trying to get away with murder himself, things could get deliciously complicated.