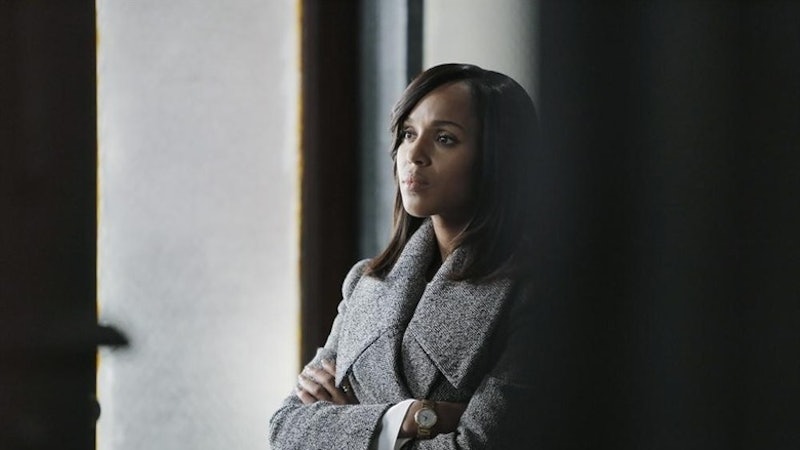 All the waiting and heart-stopping speculation is over — Olivia Pope is finally home. But will Olivia Pope as we know her ever really be the same? Because after everything she's been through — being abducted, watching two people get shot in front of her and killing another, not to mention thinking she was about to be handed over to enemies of the United States not once but twice — it would be surprising if she was the same.

Needless to say, she's going to need lots of therapy one way or the other — and it might not be the healthiest thing that she's back in the same apartment from which she was abducted. Is she supposed to just feel safe there now?

But whether or not she gets the help that she needs, she's probably not going to go back to the way she was. And so far we're already seeing evidence of that in the form of her throwing Fitz out — which I for one am totally in favor of. Fitz has not been looking the best throughout all of this, for one thing, and has never been that great anyway. But even if none of that were true, Olivia has been through a trauma and has every right to feel differently about her life and the people in it.

It will be interesting to see where the show goes from here. From a selfish perspective, I definitely want to keep seeing Olivia Pope being the power player we've all come to know and love. But it's also entirely possible she won't want to be that anymore, or might not feel up to it. Or maybe work — fixing problems and being in control — will be the only thing that does make sense to her.

Scandal hasn't shied away from giving Olivia weak moments when she's faced with things that are just too much to handle. Like that time her mother came back from the dead and or that minor mental breakdown she had during season 2. So what will be the fall out from this? Only time will tell.