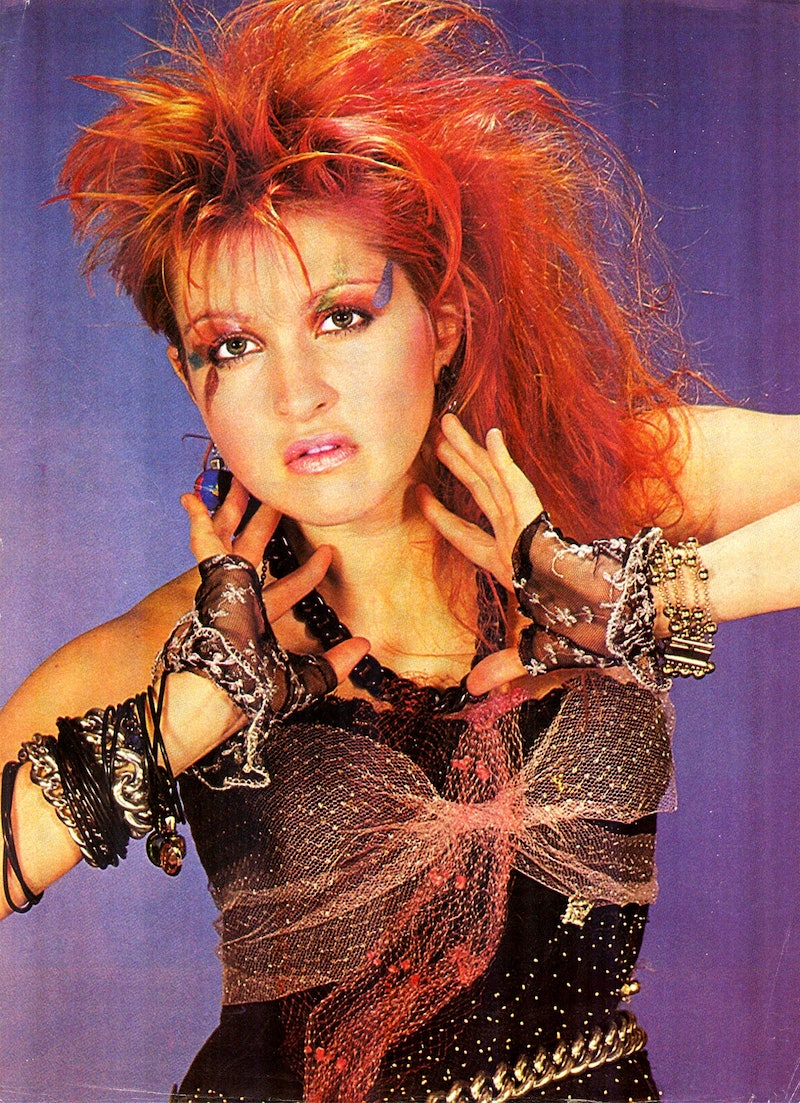 As a true blue child of the 80's, it's easy to forget that behind the neon, Aqua Net, and truly outrageous cartoons were significant feminist gains (and losses). #IfThe80sNeverStopped has been trending on Twitter, and while most of the posts detail pop culture relics we all know and love, it's important to recognize the changing political landscape of the time, too.

Powerful women dominated the decade, from Madonna to Margaret Thatcher, and feminist activists created impactful public campaigns addressing sexism in popular music, art, and pornography, along with addressing the racism and classism within the feminist movement itself.

Although my memories of the 80's may be listening to my babysitter wax poetic about her massive crush on Bon Jovi or trying to dress like Jem and the Holograms (and on other days, The Misfits), I still had a sense of women in the world getting things done. My mom was raising me on her own, and her sky high shoulder pads and feathered hair filled me with a sense of wonder every morning as she'd tote her leather briefcase to her corporate job. If anything, she's the reason I came to learn that the decade of Ronald Reagan wasn't all side ponytails and Push Pops, and much of the feminist activity of the 1980's still influences us today. So in honor of strong 80's ladies, here are 7 important feminist moments from the decade of decadence.

2. The film 9 To 5 puts office sexual harassment on blast

Released in 1980, the movie 9 To 5 is like revenge porn for sexual harassment and also happens to be the 20th highest-grossing comedy of all time. An unlikely trio of secretaries played by Dolly Parton, Jane Fonda, and Lily Tomlin join forces to give their pig of a boss Dabney Coleman a taste of his own sexist medicine. Few films can address a serious issue with such humor, but this one manages to do it perfectly. Although justice is rarely served in real life the way it is in the film, 9 To 5 remains a feminist victory for telling the stories of the women who rarely get heard, let alone make headlines.

The Equal Rights Amendment was a proposed amendment to the Constitution that would ensure equal rights under the law regardless of sex. From the mid-1970's until 1982, feminists lobbied the states to ratify this amendment, but to no avail. Interestingly, while it was women, such as Gloria Steinem, who led the charge for the ERA, it was also a woman, Phyllis Schlafly, who led the opposition. Schlafly stirred up fear amongst conservatives by suggesting that equal rights would mean women could be drafted, couldn't be supported by their husbands, and would all decide to have abortions. Today the ERA seems like a distant dream, although feminists are still lobbying their hearts out for laws that provide the same protections.

In 1984, Cyndi Lauper's not-so-subtle homage to dancing with yourself came out and hit #3 on the Billboard charts. To that point, a song extolling female masturbation had never received such widespread acclaim (and hasn't really since). Even the video for the ridiculously catchy "She Bop" is a statement, with Lauper flipping through some macho skin mags while getting hot and bothered by her lonesome in a classic car. The chorus is a sex positive rallying cry, as she points out that you, me, and everybody else does "it." In fact, "She Bop" made such a mark on feminist culture that it is now also the name of a prominent feminist sex shop in Portland. Thanks for giving us all a hand, Cyndi.

5. Guerrilla Girls form to protest sexism in the art world

Frustrated by the lack of female artists represented in museums and galleries, the Guerrilla Girls formed in 1984 to publicize the sexism inherent in the art world. Taking the names of dead female artists in solidarity, these groups of anonymous feminists began protesting in gorilla masks around the country, interrupting openings and installations where and when they could. The Guerrilla Girls' efforts to raise awareness about the ways women are represented in the art world and the ways women are represented in art have had a major impact on artistic activism (or artivism), and even spawned a best-selling book. The feminist collective is still going strong in 2015, and has created a model many performance-based activists follow today.

Sheila E. is a renowned female percussionist who served as Prince's musical director and drummer for nearly a decade and became a pop star in her own right with her 1985 hit song, "The Glamorous Life." E. (short for Escovedo) has also played with musical luminaries like Herbie Hancock, Diana Ross, and Lionel Ritchie, and contemporary stars like Kanye, Beyonce and Jennifer Lopez. In her recent memoir, she talks about embracing her femininity and wearing whatever she pleased onstage while maintaining her role as a mentor to other players as a percussionist who also happens to be a woman.

A physicist and astronaut, Sally Ride became the first woman in space when she left the earth's orbit in The Challenger in 1983. Like many female pioneers, Ride encountered sexist interrogations from the media and those around her at the time of her launch into space, confronted with questions like, "Will the flight affect your reproductive organs?" or "Do you weep when things go wrong on the job?" Despite these challenges, Ride had a storied career both in NASA and as a professor at Stanford, and created the organization Sally Ride Science to encourage girls in elementary and middle school to enter STEM fields.