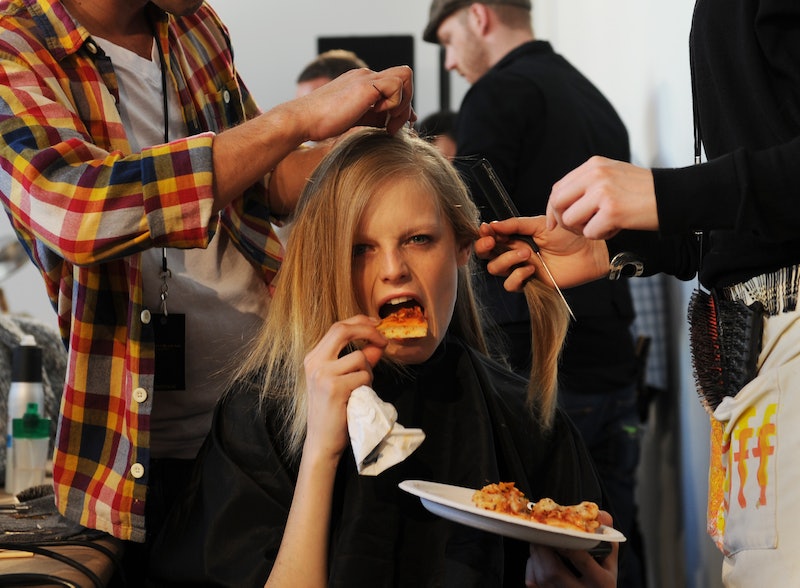 Fashion Week has moved out of New York and onto the streets of London. London Fashion Week just started, but the entire event is already off to a controversial start thanks to plus-size retailer Taking Shape and their "skinny bird watching" stunt, which reeks of all kinds of skinny shaming.

According to POPSUGAR, the retailer set up a pop-up shop outside of the Somerset House, London Fashion Week's home base. Instead of selling clothes, however, Taking Shape employees were stationed at the stand to watch for ultra-slim runway models (with the help of some literal binoculars). But they didn't stop there — the employees also drew pictures of the models, comparing them to birds, and took to social media with the #skinnybirdwatching hashtag.

Though Taking Shape’s goal was likely to promote diversity on the runway, this is just as bad as calling out someone for being fat. As POPSUGAR noted, "We all know that models don't faithfully represent consumers. It's an area of this industry that really needs to change and evolve, but surely the way to do that is to work together, not to add yet more fuel to the 'us and them' mentality."

Taking Shape responded the the widespread criticism of their campaign by released a statement:

Hi ladies - we are very sorry that many of you felt our stunt today at #LFW had a negative message, we apologize to anyone who was offended and are keen to state that our aim was never to body shame anyone. We believe that all women are beautiful and that all sizes and shapes should be represented in fashion. Check out the following press release which outlines our intentions. We hope you will see that as a brand we are all about empowering women to love their bodies and embrace fashion, no matter what their size.

The statement went on to explain that they think the models on the runway are beautiful, but their beauty is also "rare." The stunt was supposed to empower and encourage more plus-size models on the runway. Taking Shape said, "We want to empower women and make them understand that not being a size 6 doesn’t make them unusual or inferior – in fact, these super slim models are the ‘exotic birds’ of our culture."

So often we hear stories of body-shaming on the plus-sized side. And it's great. Body-shaming, in general, needs to be recognized. Unfortunately, however, the door swings both ways. Skinny-shaming affects not only models but celebrities and us mere mortals. Here are some major body-shaming moments that society kinda let slide.

Unsurprisingly, many noted the double standard evident in these lyrics.

2. Alexa Chung Got Some Heat

Chung's Instagram feed was once criticized for being a source of "thinspiration" after she posted a photo of, well, just herself. Comments started rolling in, saying things like "I'm going to be very honest. I look at this picture and think 'This is a woman not eating."

Chung responded by thanking everyone for their "teen angst discussions" and making her Instagram private. Later, she told Huffington Post, "Just because I exist in this shape doesn't mean that I'm, like, advocating it."

We so often forget that just because people are born naturally very skinny it does not mean they have eating disorders, or that they are trying to inspire others to be the same size.

In an interview with USA Today, Stone told the reporter that after reading comments like like "Eat a sandwich" or "She looks sick" she shamed herself for being a bad influence to young women. But it was not her intention. She told the reporter, "We’re always too skinny or too fat or too tall or too short. They’re just confirming this feeling I have about myself. I’m trying to figure my body out. It bothers me because I care so much about young girls. We’re all shaming ourselves, and it sucks.”

When Angelina Jolie's right leg made an appearance at the 2012 Oscars, everyone began talking about her body. Fox News anchor Bill O'Reilly stated on his show that Jolie was looking "emaciated," which, as you may know, is just a fancy word for "too skinny."

There's an entire Instagram account devoted to claiming that thing models, bloggers, and celebs didn't eat the food they photographed because how could a skinny person eat pizza/pastries/ice cream. Oh. Pleas.e

It's true that a thin person is not as subject to public ridicule as an overweight person might be. Googling "skinny-shaming" and "fat-shaming" proves that. But the point is not who gets discriminated against more, it's that body-shaming needs to stop — now. We are not all born with the same bodies, and thank goodness for that. Because we are all shaped differently, we get to experience different ways of expressing ourselves with fashion, and that's a beautiful thing!