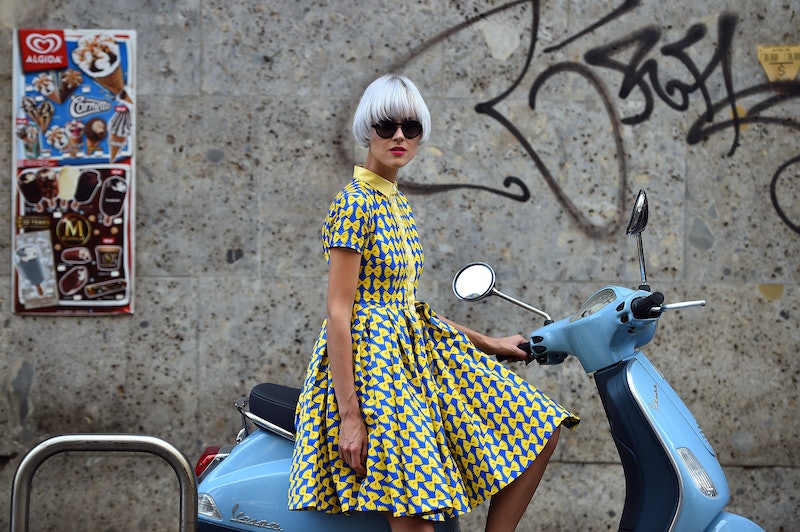 When you’re a woman, everyone has an opinion about how you look. It’s something we learn to endure with the same wary hesitance we practice when using our curling iron again after burning one of our ears. We acclimate to the reality that we can’t pass a newsstand, skim a blog or visit home without receiving some unsolicited wisdom about how we should be doing our makeup or what we should be wearing. It’s a never-ending frenzy of scrutiny, shopping and style sacrifices. For as satisfying as it is to blame faceless Big Bad Wolf culprits like the media or the fashion industry for all our troubles, the sad truth is that entirely too often our harshest style critics are other women.

I’m guilty of passing judgment myself, and not to go pointing fingers, but I don’t know any woman who hasn’t at one point or another held another woman’s style accountable for the heinous crime of being different. Just last week I saw a woman my age chatting with some friends in the cafeteria of my office building. She was wearing a long, beige dress with white tights and brown lace-up boots. Worried that such a horrendous outfit could potentially go unacknowledged, I promptly texted one of my friends (who couldn’t and will likely never even see the outfit in question), “I just saw a woman dressed like a cult leader’s wife.” I know. It wasn’t my finest moment, but it made me realize that the real fashion police we need to look out for are the ones at bars waiting in line for the bathroom with us and sitting beside us in meetings. We get so accustomed to blurting out criticism that it starts feeling like a knee-jerk reaction to what’s “ugly,” “last season,” or “inappropriate.” Of all the potential digs we use to knock a woman's style, these are the four that we seriously need to stop using:

You might already be picturing Kylie Jenner’s Instagram feed and Madonna at the Grammys. Accusing a woman of being too old or too young to wear what she’s wearing — whether it’s bright, neon lipstick or a dress with a hip bone high slit — is one of the most common critiques we fall back on when voicing our disapproval of another woman’s appearance. What complicates our reproach is that even though our insults often occur in whispers behind the offending woman’s back, we usually mean well, or at least we think we do. We want to keep the young girls from growing up too fast and dressing older than they are. We want to spare the middle-aged women the unspeakable humiliation they risk every time they leave the house wearing something slouchy. As fellow women, we want to step in from our imaginary place of authority and set things right.

When I take a second to think about why I’m so committed to the construct of teen girls wearing washed-out overalls and women over 50 wearing only corduroy pants with an elastic band and embroidered sweaters, the only honest answer I can come up with is that I’m intimidated. I think many of us buy into the narrative that says only women in their 20s can be chic. The array of embarrassing faux pas leading up to your most fashionable years are woefully immortalized in school yearbooks, and once you’re well into your 30s and beyond, you’re expected to give up and trade your trendy wardrobe for oversized t-shirts and sweatpants. Nothing obligates us to buy into that progression. Perhaps when we see a teenage girl or someone’s grandmother rocking an unexpected look with all the confidence in the world, we feel like she might steal our hard-earned fashion thunder. In reality, we should feel empowered when we see women of any age who are brave enough to express themselves through their appearance.

“She doesn’t have the chest or the hips to pull that dress off.” “She needs to lose about 20 pounds before wearing anything like that.” There are plenty of opinions out there about what women of every size should be wearing; the only problem is that we all seem to have received a different copy of the Official Manual on How to Dress Your Own Body. Pear-shaped women should categorically avoid skinny jeans! Skinny girls can’t wear low-cut tops! According to who? Many of these guidelines get their legitimacy from our own fear. We internalize these "rules," and ultimately they’re what make us second guess ourselves in the fitting room. They make things appear in the mirror that weren’t there before. The thing is, these “rules” are completely arbitrary.

As someone who has worn both a size 4 and a size 24 in her lifetime, I’ve learned that what a woman wears or doesn’t wear is determined by choice — not by size or proportions. The notion of who looks “better” in a certain style of clothing is entirely in the eye of the beholder. No number on the scale requires you to a buy a one-piece bathing suit. No lack of junk in your trunk excludes you from wearing any style of skirt. All that matters is what makes you feel confident and comfortable, and we need to stop snarking at women who dip a toe outside the stifling comfort zone of what someone with their body type is supposedly “allowed” to wear.

Most often, I've noticed we use this criticism when a woman is receiving a lot of attention for how she looks. The trouble with throwing around phrases like, “She looks like a whore,” or “She looks like trailer trash,” is that we’re cosigning the notion that it’s acceptable to infer things about a woman’s personal life based solely on her appearance. When we — as women — contribute to those misconceptions, we’re setting the example that it’s okay for strangers on the street, coworkers, Facebook friends, blind dates and family members to do the same. We need to lead by example and leave "looking slutty" out of it.

When Kim Kardashian attempted to break the Internet, one of the cruelest resounding complaints about her bare derriere concerned her status as a mom. As if there aren’t enough expectations already associated with being a parent, mothers are often expected to relinquish all concern for their appearance after they give birth. The time a woman may have previously spent applying mascara or putting a cute outfit together will instead be dedicated to changing diapers and preparing bottles once a baby is born. Don't get me wrong, shifting priorities and changing routines is a necessary and wonderful part of becoming a mother, but why are we are so quick to denigrate women who still want to be the fashionista they've always been?

Kardashian’s revealing magazine cover might be an extreme example, but we see little examples of mom style-shaming everywhere. Just about every sitcom has done some take on a new mom standing in front of her closet, wringing her hands and wondering if she’s still allowed to wear that short, red dress with the black boots that she loved wearing pre-baby. Mothers face a lot of pressure (and not just from in-laws), and to categorically insist that they must ditch their mini dresses for mom jeans is as unfair as it is unrealistic. Being a mom brings a lot of changes, but going into total fashion quarantine shouldn't be one of them.

I know we can't eradicate these criticisms overnight. Admittedly, if my mom called me today and informed me she was going to start shopping exclusively at Hollister, I'd promptly drop everything to go talk her down from that ledge. What all women can do — one day at a time — is try to be more understanding and accepting of how other women choose to look. What might only be fitting of a "cult leader's wife" for me might be couture for someone else. There's no absolute right and wrong when it comes to style, and when we rely on these archaic censures, we're only contributing and giving power to these invisible standards to which we're all measuring ourselves. We internalize the rules we set for other women, and sooner or later we apply our exclusionary standards to ourselves. Acceptance only brings more acceptance, which means the more we embrace and respect other gals' styles, the more open-minded we can be about our own.