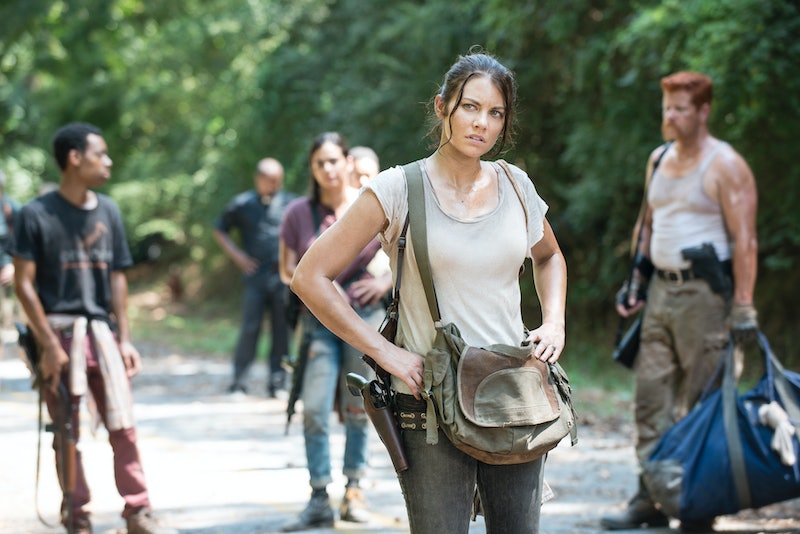 We now know that Eugene was lying about receiving orders from whatever's left of the United States Government to go to Washington and stop the Walker outbreak. But the group has decided to go North anyway. Do they ever make it to Washington, D.C. in The Walking Dead comic books? As a matter of fact, they do! It isn't the government and scientific headquarters that Eugene Porter first made it out to be, but comic book readers have gotten a glimpse of what the nation's capital has become.

The promo for next week's episode shows my new L.L. Bean Boyfriend Aaron being interrogated by the group and presenting a few photos of what is most likely the Alexandria Safe-Zone. Will this journey take them to Washington or sidetrack the group once again? This is just one of the many ways that the series has deviated from the comics, as I will explain.

In honor of last week's rainfall, let's go back... back to the beginning. (Yes, that is a Hilary Duff reference, what of it?) Similar to the AMC series, in the comics the group begins their trek to Washington after their battle at the prison. However, it wasn't until they got there that Eugene revealed his secret. This makes their journey somewhat meaningless. The city is no different than Atlanta, run-down and full of Walkers. The metropolis is also used for supply runs. At one point, Glenn discovered a group of survivors in the city that were getting by on scavenging and are desperate to be allowed inside the walls of the Alexandria Safe-Zone.

The scavengers are lead by a character named Derek who we have yet to meet on the television series, but is significant to The Walking Dead beyond the Washington storyline. He is yet another brutal foil to Rick Grimes and his method of leadership. Derek is willing to sacrifice one of his group to the undead in order to clear a safe passageway. Derek then takes his people and they try to shoot their way into the Safe-Zone. Not very safe now, is it? He and one of his snipers are killed by Andrea. This conflict causes a large herd of Walkers to be attracted towards the area. So getting to Washington is just one in a long line of dominoes, it seems.

Will the group make it there on the show? I think it's likely that they will. The series has made references to refugee camps that were set up in the city during the early days of the outbreak, which could explain the presence of the scavenger groups. We know that they are headed towards the Alexandria Safe-Zone now. At least, that's what I assume the "good news" that last week's stranger had to bring was referring to in the episode.

The city of Alexandria in Virginia, while arguably not the most accessible by Washington public transportation, is one of the cities that borders the District of Columbia. Unless a greater danger awaits in Alexandria than we anticipate, I would expect Rick to take a few friends and poke around our nation's capital while they are so close. At the very least, the post-apocalyptic monuments will be a visual treat, and educational for Carl and Noah.