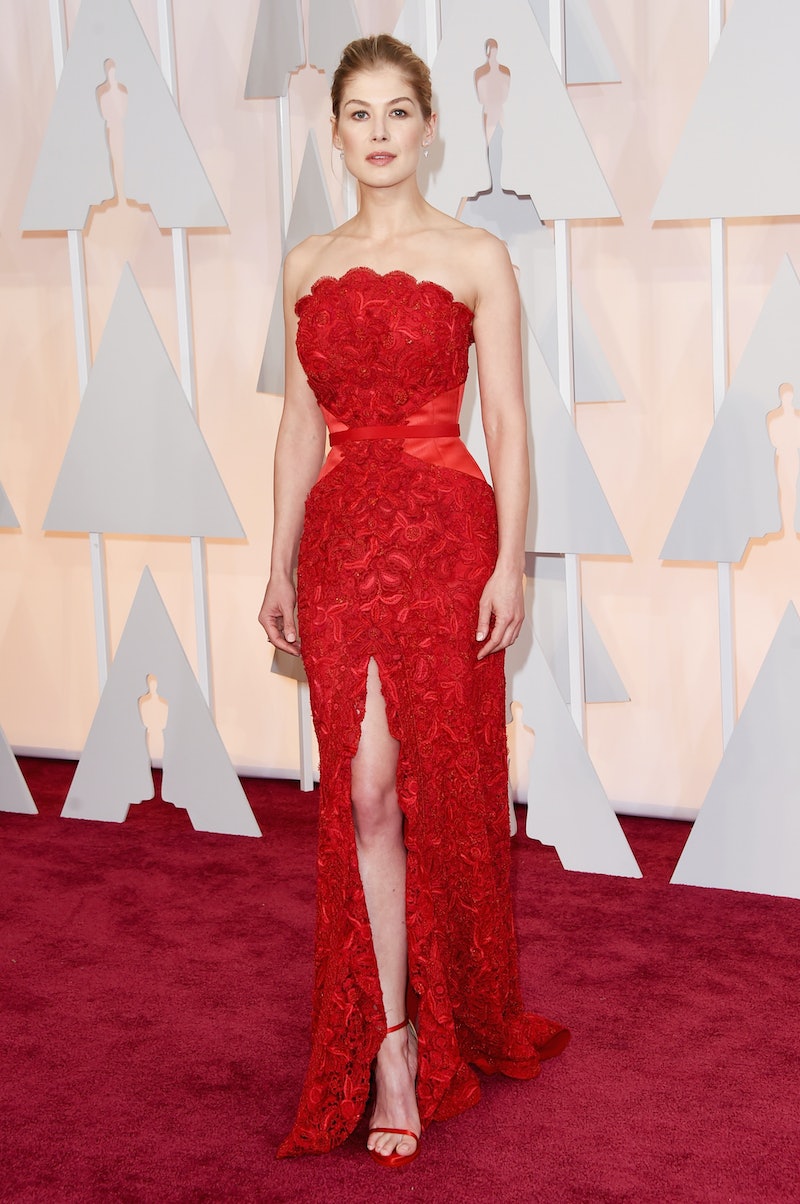 It's true that Rosamund Pike has been acting in Hollywood for awhile now, but Gone Girl has catapulted her at hyper-speed into the spotlight (to say the least). In the 2015 award season, Pike has been nominated for best actress again and again (Golden Globes, SAG Awards, Critics Choice), but being nominated for best actress in a leading role at the Academy Awards? That's a whole other ball game. So while Pike has been rocking white gowns again and again and again on the red carpet this award season, all of us fashion lovers were secretly hoping she'd wear something a little bit different to the Oscars, right? Luckily, for this year's Academy Awards, Pike wore a Givenchy gown and not only is it not white, but it is totally stunning for a variety of reasons. But did I mention it's not white?!

For the 2015 awards season, Pike has definitely had some hit or miss red carpet moments. While white gowns are stunning with her complexion and overall beauty looks, something about the fit of some dresses (let's talk about that Golden Globes moment, shall we?) has been very, very off. Granted, let's keep in mind that the woman had a baby not too long ago at all, and she looks gorgeous in all of the dresses — but I've always felt that they could be just a little bit better. A little bit more exciting, you know? In any case, I was excited to see that Pike chose something different at this year's Oscars.

When you compare the Givenchy gown to her other award season dresses, it's obvious what the clear winner is here. Not only is the gown an ACTUAL COLOR (can you tell I'm really excited about that?), but the fit seems to suit the actress more as well. Pike isn't exactly a front-runner for the best actress award, but she certainly has the potential to end up on some best dressed lists. If you aren't sure how you're feeling about this gown, though, let's compare the look to Pike's past dresses this award's season.

Pike wore Vera Wang to the 2015 Golden Globes and while the ethereal, flowy white gown looked angelic on her, the fit was all, all, ALL wrong.

And Pike's Critics Choice Awards look? Well, it's kind of the same deal as the Golden Globes moment, but a little more...blah. The gown was actually two pieces: A Valentino skirt and a white, turtle neck top. I admire the creativity, but this look was kind of a flop.

As you can see, it wasn't really hard for Pike's Oscar gown to blow these two looks out of the water in any case. There wasn't a whole lot to compete with. Pike is stunning no matter what she wears, but it's nice to see her move out of the white gown box to say the VERY least.