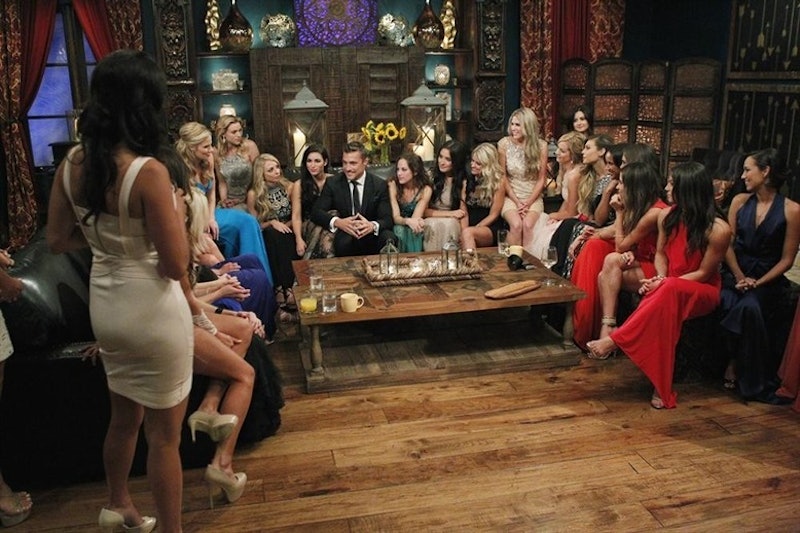 One of the things I love the most about when The Bachelor is in season is following along with Reality Steve's posts and abundant spoilers. Although a lot of people choose not to spoiled and find the fun in guessing who the winner might be all season long, I've never been much for surprises — in reality TV and in life. I prefer to know what I'm getting into in all areas of my life, even in my totally unrealistic dating shows. And for me, most of the fun in watching The Bachelor this season has come from knowing exactly who Chris Soules is going to propose to in the end and watching his relationship develop with her. And even though some people are doubting his expertise, I strongly suspect Reality Steve is right about Season 19's Bachelor winner.

If you don't want to be potentially spoiled, I highly suggest you stop reading at this point. If Reality Steve is right — and I suspect he is — I am about to ruin the rest of the season for you. If you're still reading, I'll assume you either read Steve's stuff too or that you're dying to know who wins, so I'll speak straightforward about it from this point on.

When I first read that Whitney would be the Bachelor winner, I was a little surprised. She pretty much kept to herself and didn't get as much screen time as the other women at first, which are two signs of someone not being the winner. But as soon as they crashed that wedding, they may as well have just ended the season right there. Chris can say whatever he wants about his crazy chemistry with Britt Nilsson (which, as we now know, was a total crash and burn situation), but the real, this-love-can-actually-last chemistry exists only with Whitney.

Whitney seems to share Chris' values and vision for the future; she's ready to get married and start a family right away (just like Chris seems to be); and she's (thus far) totally undaunted by the fact that our bachelor lives quite literally in the middle of nowhere. Besides all that, she seems like she's fun to be around (even on the remarkably stupid dates ABC puts all of these women through), she's got a good sense of humor, and she seems to be pretty easygoing.

Of course, once Whitney and Chris pretended to be engaged when they crashed the wedding, word got out and fans proceeded to go totally nuts. But if Reality Steve's spoilers were only based on that one wedding, wouldn't he have been wrong about other eliminations and crazy happenings this season? So far, all of his spoilers have been spot-on so I'm still trusting Steve on this one. And honestly, all spoilers aside, if Chris picked anyone but Whitney, he'd be absolutely nuts.

That's not to say he wouldn't be perfectly happy with Becca or Kaitlyn in the end, but I don't think they're the right women for him in the way that Whitney is. Actually, I don't think he's right for them— he's a little too boring for Kaitlyn, and I think Becca would benefit from a partner who's closer to her age. Whitney's ready to be Mrs. Farmer, and I think she'd be great, especially if she and Chris came to some compromise where she could actually keep her super amazing job as a fertility nurse.

I'm totally up for a surprise on finale night, but for now, I'm sticking with Reality Steve. Whitney's most definitely the winner if you ask me, and I'd be incredibly happy with that choice — even if I'm not necessarily happy with Chris' behavior this season (which is a whole other can o' worms). Whitney's got this one in the bag. Chris, don't let her (or me) down!