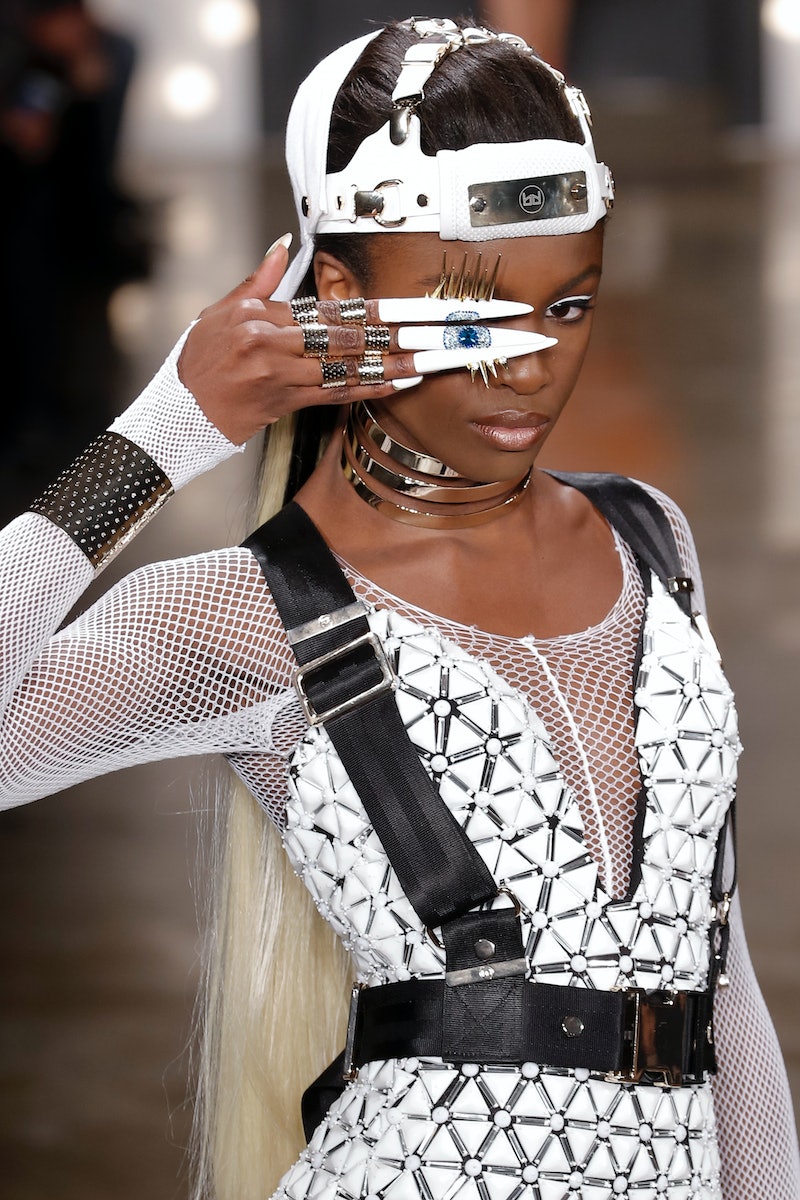 Fashion month continues, with the next round of runways already being walked in London, but, per the usual, New York designers put some looks out into the universe that are still sticking with us. For better of for worse, we have become a culture subconsciously dependent on shock and awe, which makes it harder and harder for today's designers to simply draw up a dress that will captivate the crowds. Sometimes, it seems designers are purposely trying to be the Miley Cyrus' of fashion week — anything for a buzzed-about show. Other times, outrageously creative minds just explode and a mess of over the top weirdness spills out onto the catwalk. Either way, from imaginatively unwearable beauty looks that conjure up images of nightmare baby dolls to Andy Warhol inspired pop art apparel, NYFW presented some head scratching moments that still have us in the midst of a WTF moment.

Carolina Herrera stopped by Late Night with Seth Meyers after her expertly crafted show to talk all things wedding dresses and fashion week. During their chat, the veteran designer not only reminded us of why she is the queen (seriously, if I die and go to heaven it will be continuous conversation with her), but also took us down memory lane — back to a time when fashion week was less pomp and more circumstance. Whether we can believe it or not, Herrera, who first graced NYFW with her presence in 1981, says the events used to be "quite civilized" when the shows were "much more smaller." Now, the sought after dress designer believes the activities in the tents have shifted saying, "There were not these spectacles there are now. They are so huge everywhere. Sometimes they forget about the clothes. They go to see the spectacle and the clothes are secondary. [Shows] have everything, they are like a circus."

While FROW goers weren't under the impression they bought tickets to the circus, there were a few shows that upped the crazy ante with their presentations. Whether through their beauty looks, fashion pieces or presentations, these designers took it to another level with shows that we have yet to forget.

From the pop painted eyeshadow and egg yolk paint splattered hair to the animated outfits, the models at Jeremy Scott looked like they walked out of a Katy Perry video, giving Chucky a run for scariest baby dolls on the fashion week block.

Alexander Wang's newest collection is gritty goth luxe, which, with the exception of the metal mesh ensemble Behati Prinsloo rocked down the runway, could actually become the new uniform of New York's all black everything loyalists. Let's just hope the greased up, stringy, face-covering locks are optional.

From the unmoving all-white girl on the morgue-esque metal table to the models with sheer black fabrics over their faces, Thom Browne's show gave off unnerving death vibes. TBH, I couldn't even tell you if I remotely liked the clothes — the perfect example of the spectacle stealing the spotlight from the fashion.

While Kanye West x Adidas wasn't all bad, head to toe pantyhose aren't exactly a look you can take from the runway to the streets. The sheer body condom he tried to highlight as an urban update was alien-like and probably something we could have done without.

The creative minds at Chromat are responsible for many "structural experiments for the human body," but this crazy cage dress stands out as one of the most over the top architectural creations to date. Pretty much the only person that could pull this off is Lady Gaga — maybe they can offer it in white for her impending nuptials?

Metallica inspired pink poodle dresses matched with IRL poodles walking down the runway, making for an over the top moment at VFILES. There were also abstract sweat suits, sequin maxi's with suspenders that had a pre-makeover Pretty Woman vibe and an eye laden heart mini dress. It was as if Andy Warhol rose from the dead and made his designer debut at NYFW.

Nothing was scarier than the nail art worn by the models on The Blonds runway. Modern, amped up Edward Scissorhands was the beauty vibe and as for the fashion, we found rhinestones in all the wrong places.

Crazy creativity strikes again! None, I repeat, none of these fashions are wearable, but they certainly got us talking about the art of it all. Someone has to be responsible for the spectacle, right?