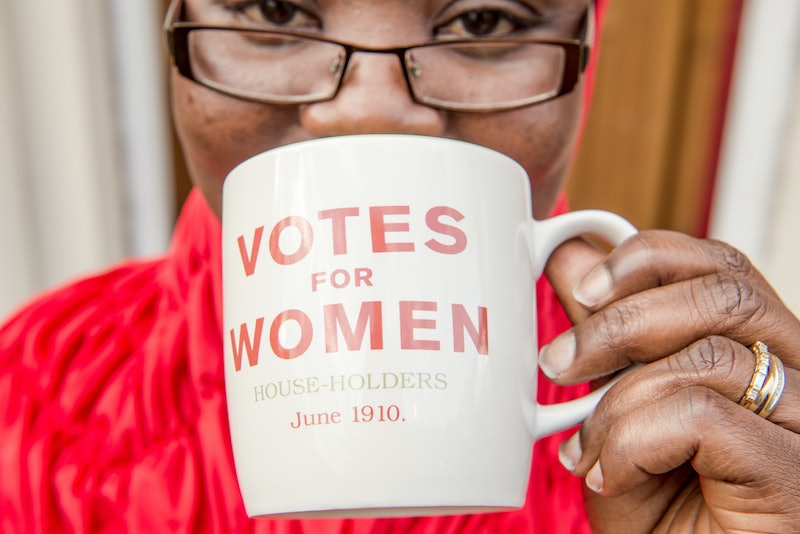 It might not be the most wonderful time of the year yet (a.k.a. Women's History Month), but here's a reminder that our sisters in the women's rights movement were super badass and awesome anyway. The Progressive recently reprinted suffragette Jane Addams' "If Things Were Reversed” listicle from 1912, Jezebel reports, and even a hundred years later, it's a pretty hilariously sarcastic takedown of the obstacles women face in everyday life. In fact, it's just a few GIFs and a pop culture reference away from being BuzzFeed-worthy.

In addition to being creator of the proto-listicle, Jane Addams was a Nobel Peace Prize recipient, founder of the Women's International League for Peace and Freedom, first woman to be awarded an honorary degree from Yale, and all-around BAMF. Her efforts on behalf of the women's suffrage movement paved the way for Beyonce and Emma Watson to be their badass feminist selves today, and she was so vocally pacifist that when the U.S. entered World War I, she was labelled a "dangerous radical and a danger to U.S. security" for her extremely public protests, according to the Nobel Prize website. So what did the esteemed Ms. Addams do when she got tired of proto-meninists' flimsy arguments against women's right to vote? She somehow found time in her busy schedule of advocating for the rights of immigrants and their children to turn those arguments back around on men. As published in The Progressive:

Second: They would vote as their wives and mothers did.

Third: Men's suffrage would only double the vote without changing the results.

Fourth: Men's suffrage would diminish the respect for men.

Fifth: Most men do not want to vote.

Sixth: The best men would not vote.

(Told you all the list needed was a GIF.)

More like this
Sandra Bullock, Girlboss Extraordinaire
By Matt Harkins & Viviana Olen
Here’s What Sarah Jessica Parker’s Canned Cosmo *Actually* Tastes Like
By Emma Garza
Rihanna & A$AP Rocky’s Astrological Compatibility Proves They'll Be Amazing Parents
By Nina Kahn
10 Times Boris Johnson Got It Wrong On Trans Rights
By El Hunt and Sam Ramsden
Get Even More From Bustle — Sign Up For The Newsletter