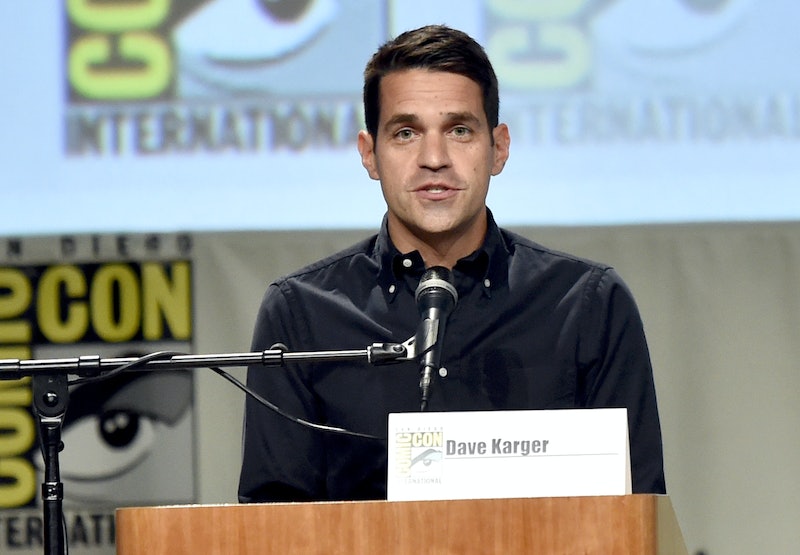 If you're someone who watches E!'s award show red carpet coverage on the reg, you're probably familiar with all the usual faces by now. There's Giuliana Rancic, Ryan Seacrest, Kelly Osbourne, Ross Mathews, and a few others, but someone you might not be so familiar with is Dave Karger who helped cover the 2015 Oscars red carpet. And, if you watched Sunday night's coverage, he probably stood out to you, because instead of conducting interviews and talking fashion, Karger stepped in to talk about the actual films and actors nominated in between all of the celebrity chats. Karger's moments were refreshing and he was really one of the best parts of the pre-show.

A quick run-down on Karger: he previously worked for Entertainment Weekly as a senior writer, and currently works for Fandango and hosts shows for the site, and is also a correspondent for Access Hollywood. Obviously, he shares his talents with E!, as well, and it's a good thing, too. As much as I love hearing what stars are wearing and about their upcoming projects, getting some real analysis of the films sprinkled in was a great addition — especially because the red carpet show is three hours long.

Here are some of the reasons Dave Karger was a welcome addition:

Talking about the nominees for Best Picture, Karger said,

I have to give a shout-out to Reese Witherspoon because Wild is my favorite movie of the year. And I'm actually dismayed that more female-dominated movies weren't recognized in Best Picture. If you look at all eight of the best picture nominees, they're all lead characters that are men. And I know that's something that's important to Reese, as well.

Not a fan of hearing celeb after celeb talk about their fancy clothes for the night and the projects that they're promoting? Movie snob who wants an excuse for indulging in red carpet fashion? Need a break from Seacrest's new beard? Karger's film commentary is here for you.

He Let's Us Know What To Expect

With the red carpet coverage being so long, it's nice to hear some about what we can expect when the Oscars ceremony begins. If you haven't caught up on what actors and films are expected to win by the experts this year, Karger's helpful rundown lets you know what to look for as far as snubs and surprises. For the record, he thinks Boyhood will win Best Picture!