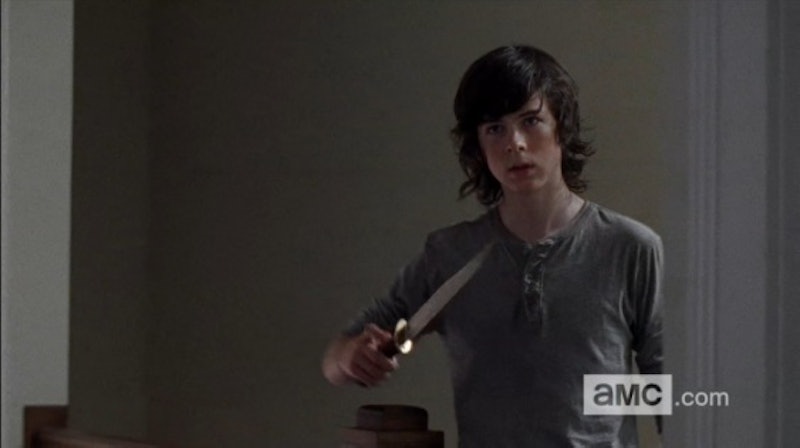 In the eleventh episode of The Walking Dead, "The Distance," we got to see quite a lot, and many suspicions and fan-theories were finally confirmed. Aaron is who we all thought he was! He and Eric even shared one of the most passionate and emotionally-charged kisses to ever air on TV. Rick's been keeping Judith alive by smashing up acorns with his gun! The biggest reveal of all, however? The Alexandria Safe-Zone is not only real, but it's going to be home-sweet-home for Rick and co. for the foreseeable future. Unfortunately the sneak peek for next week's episode of The Walking Dead, "Remember," might tell a different story since it has Carl cautiously approaching a room in an unfamiliar (but beautifully kept) home, hunting knife at the ready. Is the Alexandria Safe-Zone actually safe, or is The Walking Dead about to have another Woodbury situation on its hands?

After months and months of speculation, the confirmation of Alexandria's existence and a brief shot of its gates at the end of "The Distance" was oh-so satisfying, but if TWD has taught us anything, it's that nothing good ever lasts for long. While Judith may need a place to grow up that isn't crawling with oozing members of the undead, and everyone else in the group deserves a community where they can finally have peace of mind, the ever-looming threat of Negan and whoever might be waiting for them behind the Alexandria gates threatens that stability.

The clip from "Remember" only mirrors those fears, putting Carl alone in a creepy house possibly inside of Alexandria, about to bust in on whatever's lurking behind that door. It's just a reminder that, as always on The Walking Dead, the fear of the unknown is almost always scarier than the actual zombies.