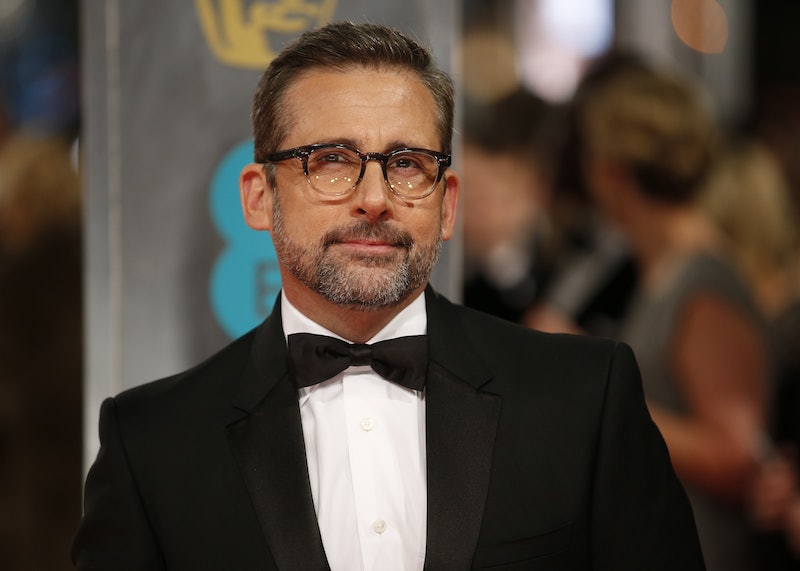 While all eyes were on the stunning gowns the actresses rocked on the red carpet tonight, Steve Carell made a big statement with his outfit — although you probably missed it. It turns out that Carell, along with American Sniper's Jake McDorman (better known to me as Evan on Greek), sported cufflinks to support Emma Watson's feminist campaign HeForShe. It's official, folks! Feminism is everywhere.

Watson, who launched her HeForShe campaign back in September, personally thanked both actors via Twitter and Instagram for supporting the cause at the ceremony tonight. The cufflinks, designed by Monique Pean, are super sleek and subtle. Based on the image Watson posted to Instagram, there are two different styles — one small, round, and ringed with gems and one larger with a more geometric shape — and both are equally as cool. Besides, isn't gender equality always in style?

The Oscars aren't exactly known for treating women with tons of respect. It's evident in the different questions male and female actors are asked in red carpet interviews and in the distinct lack of gender equality in the award nominations themselves. Kudos to Carell and McDorman for boldly proclaiming their allegiance to a very important cause on one of the most glamorous nights of the year.

Besides, these are pretty cool, no?

More like this
Anne Hathaway Is Giving Major Princess Mia Vibes On The Cannes Red Carpet
By Sam Ramsden
Sandra Bullock, Girlboss Extraordinaire
By Matt Harkins & Viviana Olen
10 Swoon-Worthy Beauty Looks From The 2022 Cannes Red Carpet
By Olivia Rose Ferreiro
10 Ways To Modernize The Early '00s Frosted Eyeshadow Look
By Olivia Rose Ferreiro
Get Even More From Bustle — Sign Up For The Newsletter