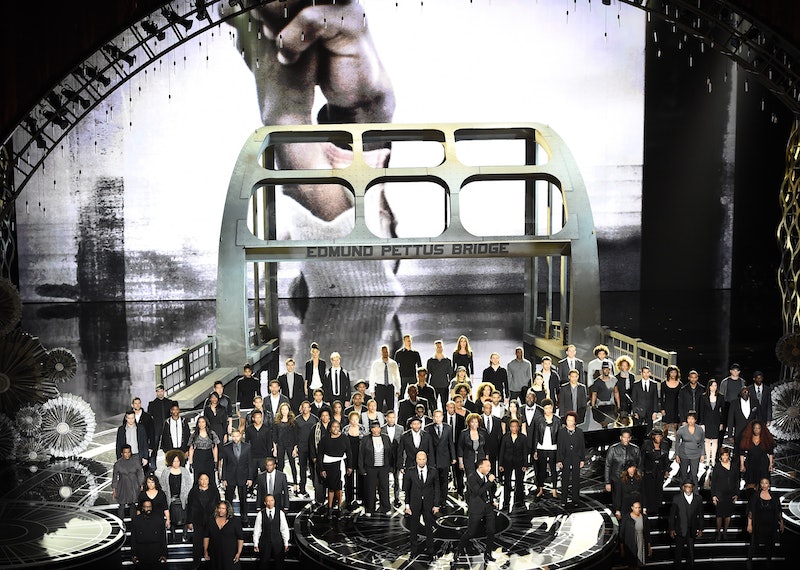 It was an emotional night at the Academy Awards for John Legend and Common, who both took home an Oscar for penning the song "Glory" for Selma, the Ava DuVernay-helmed epic about the civil rights march through Alabama in 1965. About an hour after Patricia Arquette made a feminist call in her Best Supporting Actress acceptance speech, Legend and Common escalated the evening with a powerful civil rights message for the 21st century.

Common began the songwriters' speech by reminding everyone that just 50 years have gone by since Dr. Martin Luther King, Jr. led the valiant march for voting rights for African-Americans across the Edmund Pettus Bridge in Selma, Alabama. On March 7, 1965, the march turned into a massacre, as Alabama state troopers physically attacked the peaceful demonstrators, shedding blood in order to stop them from crossing that bridge named after a Confederate general and Ku Klux Klan member.

"Recently, John and I got to go to Selma and perform Glory on the same bridge that Dr. King and the people of the civil rights movement marched on 50 years ago," Common said. "This bridge was once a landmark of a divided nation, but now is a symbol for change."

Although Common shied away from explicitly mentioning Ferguson, Missouri, or the unfolding Black Lives Matter movement, he did connect the Bloody Sunday Massacre at Selma to the fight for justice going on today in all corners of the world. "The spirit of this bridge connects the kid from the South side of Chicago, dreaming of a better life to those in France standing up for their freedom of expression to the people in Hong Kong protesting for democracy," Common said.

Legend then made a political and impassioned call to end the mass incarceration of African-American men — an ugly aspect of the American government that no one likes to talk about in the mainstream. The Oscar-winning singer-songwriter laid out some hard truths:

[W]e say Selma is now, because the struggle for justice is right now. We know that the voting rights, the act that they fought for 50 years ago is being compromised right now in this country today. We know that right now the struggle for freedom and justice is real. We live in the most incarcerated country in the world. There are more black men under correctional control today than were under slavery in 1850. When people are marching with our song, we want to tell you that we are with you, we see you, we love you, and march on.

Legend is right: The United States has an alarming rate of incarceration, featuring more prisoners than any other country in the world. However, Vox points out that while Legend's fact about the number of incarcerated black men is true, it's also a bit misleading: It's not just African-American men in prison, but men who are under "correctional control," such as on parole or probation. All in all, nearly 1.7 million African-American men are under correctional control in the United States, about three times the number of enslaved black men in 1850.

It's a staggering bit of truth that only further highlights America's lopsided equality. Appropriately, Ava DuVernay's film prior to Selma, the soulful Middle of Nowhere, deals with the issue of mass incarceration of African-American men and how it affects African-American women — their wives, girlfriends, sisters, mothers — on a daily basis.

More like this
Remember When Benedict Cumberbatch Announced His Engagement In A Newspaper Ad?
By Hugh McIntyre
Tom Cruise Gives His Honest Review Of Lady Gaga’s New Song For 'Top Gun: Maverick'
By Hugh McIntyre
Is Megan Fox Pregnant? MGK Gave A Shout-Out To Their “Unborn Child” Onstage
By Hugh McIntyre
Lisa Marie Presley Reviewed Baz Luhrmann’s ‘Elvis’ Movie On Twitter
By Grace Wehniainen
Get Even More From Bustle — Sign Up For The Newsletter