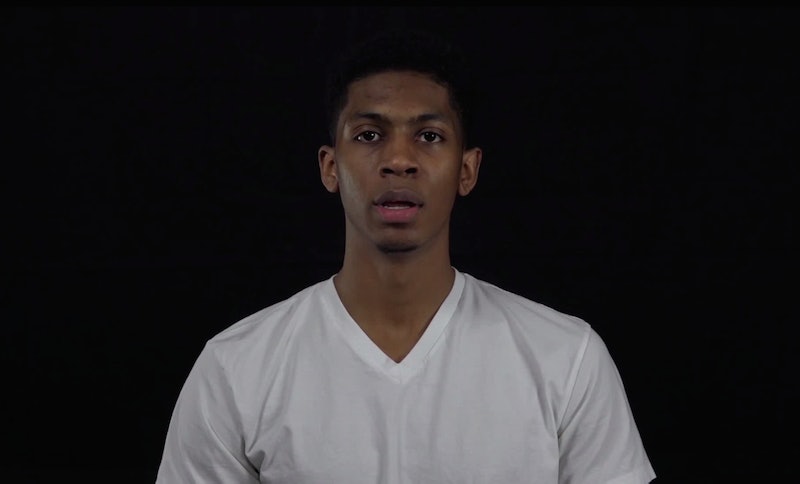 Here's an excellent way to spend your next five minutes: watch this University of Pennsylvania student perfectly explain the harmful double standards for women and men. Chaz Smith, a 20-year-old cinema studies major, links the way boys are taught to play sports aggressively and girls are taught to "play it safe" to sexual stereotypes. Smith teamed up with One Student, a nonprofit dedicated to reducing sexual violence, to produce a video destroying these double standards and offering simple solutions.

In the video uploaded Feb. 18, Smith says, "Guys that swing a lot are the MVPs, while the girls that pitch a lot are sluts." He continues the baseball metaphor, going on to say, "Guys, men are not the offense and women are not the defense. This game should not go on if she does not want to get to home base."

Smith's video is targeted toward men who may not see the role they play in sexual assault and think they "own women," calling out the media for distributing so many images and videos of men dominating and controlling women.

In an interview with One Student, Smith says:

Going into the production of the video, I wanted to create something that would wake people up to the reality of sexual assault because it literally happens everywhere and to a large percentage of the population, but far too often goes unreported because of the nature of the crimes.

Sexual assault on college campuses has emerged as a major problem across the country, with new high-profile cases surfacing constantly, including the rape claims by Ellie Clougherty at Stanford and the alleged gang-rape at the University of Virginia. But despite the increased media attention toward the issue, most sexual violence on campuses goes unreported to the police.

Smith's video offers a much needed explanation for men about what consent means and why women shouldn't be blamed for being assaulted, saying, "Stop telling women that it's their fault when we are the dogs who make the catcalls." He (rightly) points out larger social issues that lead men to become more aggressive and believe women owe them sex, which of course is never the case. At the end of the video, Smith lays out three simple solutions for men: love people, respect people, and do not assault.

How he fit all of these insights into one five-minute video is beyond me. Watch the video below.

More like this
The Church Of Scotland Votes To Allow Same-Sex Marriages
By Sam Ramsden
How The City Healed Five Years On From The Manchester Arena Attack
By Ella Glover
Harry Styles Called For "Backlash" In Powerful Statement On Abortion Rights
By El Hunt
Sandra Bullock, Girlboss Extraordinaire
By Matt Harkins & Viviana Olen
Get Even More From Bustle — Sign Up For The Newsletter