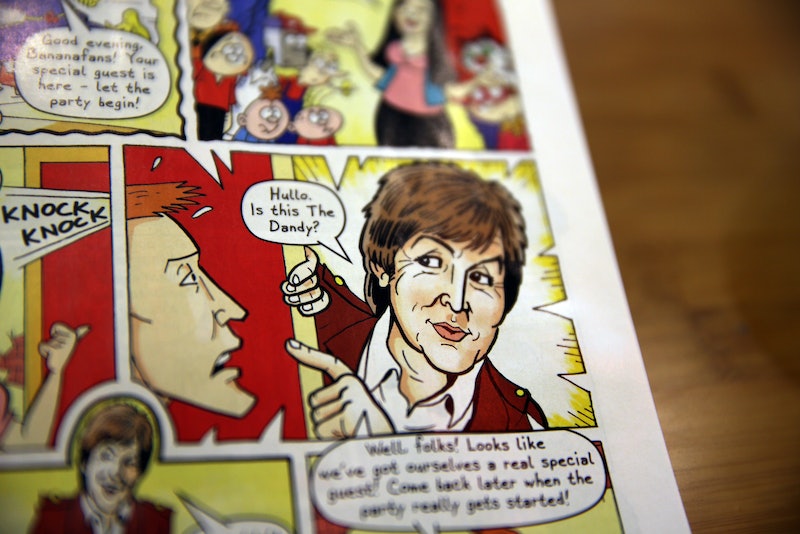 Illinois 5th grader Rowen Hansen first wrote to DC Comics in January with her questions and concerns about women in superhero comic books. "I love superheroes and have been reading comics and watching superhero cartoons and movies since I was very young," she writes. "I'm a girl, and I'm upset because there aren't very many girl superheroes or movies and comics from DC." The letter also mentions how many of the products for existing female superheroes are marketed with pink or purple.

"Girls read comics, too," she says in closing, "and they care."

Hansen's father posted a photo of her handwritten note on Twitter, and the letter was shared widely across social media, with lots of people expressing their agreement and support for Hansen's points. After all, girls and women have been ardent comic book fans for generations now, and it would be nice if comic book companies started acting like it.

The note was shared so widely that DC Comics actually responded via Twitter, as well.

Hansen told TODAY that getting a response was "really, really cool," but now DC has even gone a step further and also created an image of Hansen as a superhero.

Because fighting sexism is a heroic thing.

As awesome as it is that DC has taken Hansen's concerns seriously, it's also important to remember that it's not a substitute for change. As Hansen herself told TODAY after DC first responded, "I don't want people to think, 'Oh, yeah, okay, they responded to her. Now it's over.’ I want people to keep trying to make this happen, ’cause it's really important to me."

To which I say, "Amen!" We have honestly reached the point where it's absurd that there aren't more female superheroes — and where we still don't have any female superheroes headlining blockbuster films. The Wonder Woman movie is due to start filming this year, but let's be real: the fact that a movie about Ant Man got a green light before Wonder Woman is ridiculous.

Hopefully whoever at DC Comics made that drawing of Rowen Hansen agrees, and is in a position to make such changes happen. It's about time.

More like this
What Does Doctor Strange’s Third Eye Mean?
By Arya Roshanian
The 20 Best Audiobooks To Fall Asleep To
By Aoife Hanna and K.W. Colyard
'Bridgerton' Star Nicola Coughlan Confirms Season 3 Will Focus On Colin & Penelope
By Grace Wehniainen and Alyssa Lapid
Candice Carty-Williams’ 'People Person' Tackles Daddy Issues With Warmth
By Sam Rogers
Get Even More From Bustle — Sign Up For The Newsletter