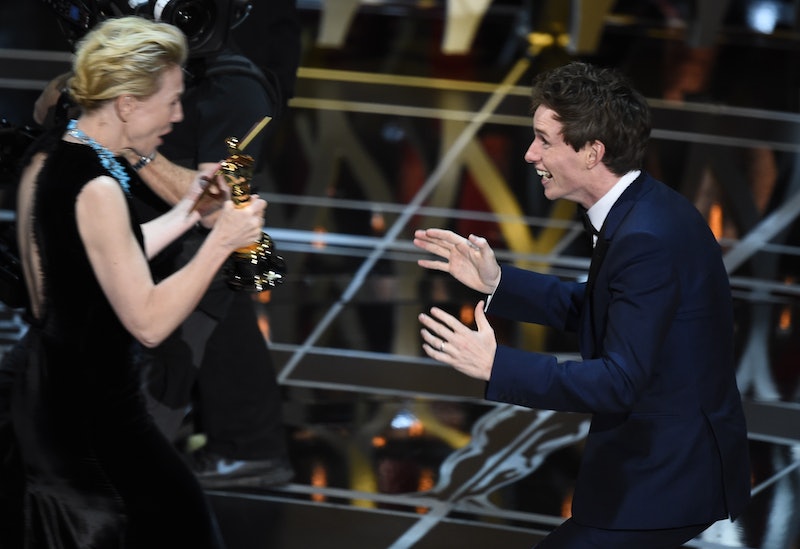 After Eddie Redmayne won an Oscar for The Theory of Everything , he freaked out. It was adorable and frantic and had him clutching the statue to his chest and promising to take the best care of him. This wasn't Redmayne's first award-season win, though — it was his fourth, meaning that three previous acceptance speeches came before he got the coveted gold statue. Throughout the season, Redmayne has turned on the charm with silly and cute moments on talk shows, so we know how candid and spontaneous he can be, but he took it to the next level when he got super excited onstage throughout the past few months. From thanking Bradley Cooper twice at the SAG Awards to telling a story about his food poisoning at the BAFTAs, he's solidified his status as an international treasure, with each speech seemingly better than the last. But which one is the best? I've ranked all four of his speeches by sheer adorableness, which is no easy feat, but compared to transforming yourself into Stephen Hawking, it was pretty simple.

Check out the quartet of Eddie Redmayne's acceptance speeches below, and let's all cross our fingers that he makes another great film this year — we could use him onstage this much during award season 2016.

"I've had to spend most of the evening trying to prevent myself from fawning over a legend of actors I've long admired," Redmayne admitted. "I apologize, Mr. [Robert] Duvall — I haven't been entirely successful." This paired with his shout-out to his new wife, Hannah, about their honeymoon was sweet, but there were even better speeches later in the season.

Redmayne told a story about how he "redecorated the corridor" of the Royal Opera House when he had food poisoning a few years back, but there was a reason behind his gross tale. "That was one of worst nights of my life, and this is one of the best." He also called Felicity Jones a "wonder," which made me "aww" aloud.

Redmayne not only thanked Bradley Cooper twice, but also dedicated this "wonderful skinny man" statue to people who are living with or who have died from ALS.

He freaks out, clutches and hugs his statue, and then proceeds to explain how he'll take care of him. "I will be its custodian. And I promise you I will look after him. I will polish him, I will answer his beck and call, I will wait on him hand and foot," he explained. And then he ended it with the most adorable thank you to his wife. "You, Hannah, I love you so much. We have a new fella coming to share our apartment."