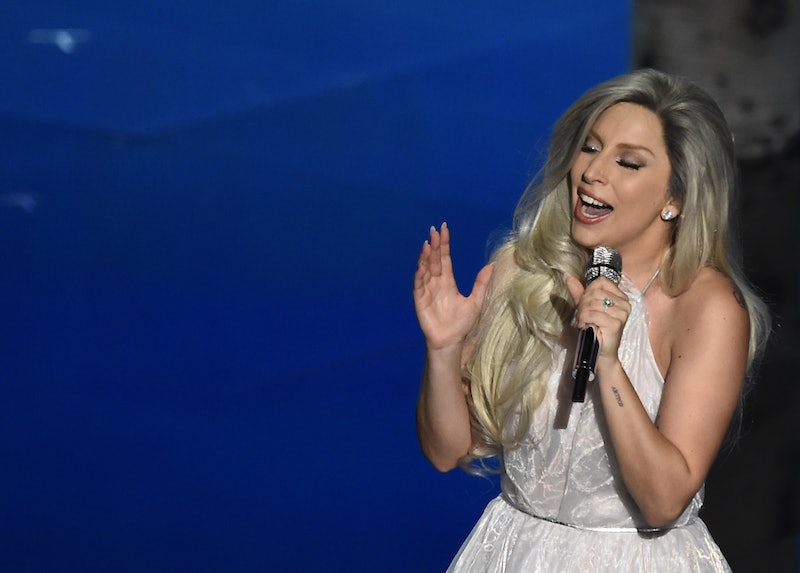 Another Fox report, another painfully embarrassing comment. During a local report on Sunday night's 87th Academy Awards, an anchor for a Cleveland Fox affiliate called Lady Gaga's performance "jigaboo music." Kristi Capel apparently did not know that "jigaboo" is an extremely derogatory term for African-American people — an antiquated racial slur that dates back to Jim Crow days — so how it came out of her mouth in 2015 is an utter mystery.

During Monday morning's New in the Morning show on Fox 8, anchors Capel and Wayne Dawson recapped Sunday night's Oscars. Dawson mentioned Lady Gaga's performance, which was in honor of the 50th anniversary of The Sound of Music.

Lady Gaga, surprising a lot of people last night with this tribute to Sound of Music.

It was a performance that The Sound of Music's star Julie Andrews called "wonderful." However, Dawson's co-anchor, Capel, gave quite a different review of Gaga's performance.

It’s hard to really hear her voice with all the jigaboo music — whatever you want to call it — jigaboo!

If that doesn't make you want to slap your palm to your forehead, then I don't know what would. Even Dawson, who is black, was visibly startled and uncomfortable, most likely thinking, "Where did they find this person I have to sit next to every damn morning?"

For the sake of keeping up appearances, Dawson replied, "She has a nice voice," and gave a nervous laugh. Capel, completely oblivious that she had just sounded like a plantation owner in 1832, added, "She has a gorgeous voice. I never knew. Very nice."

Not surprisingly, Capel received backlash for her use of the racial slur from angry viewers on Twitter.

Realizing her very serious gaffe, Capel issued a very halfhearted apology, which she pretty much copied and pasted to everyone who tweeted at her:

It wasn't the only major Oscars-related gaffe Monday morning. On Fox & Friends, Clueless actress (it pains me to make this association) Stacey Dash slammed Patricia Arquette's glorious acceptance speech, in which she eloquently and fiercely called for equal pay and equal rights for women in America once and for all. Dash said that she "agreed with Mr. Trump" that the Oscars ceremony was continuously losing its "elegance" and "class." I hardly think that Fox & Friends is one to talk.