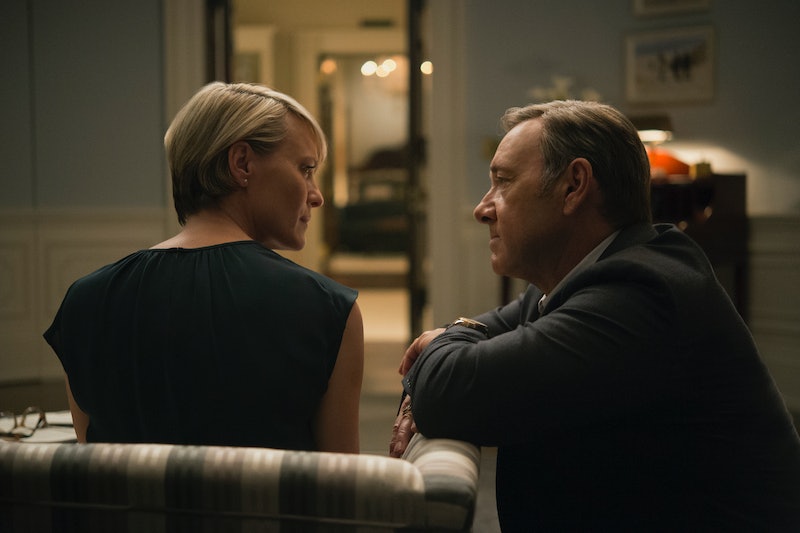 Are you ready for the return of the Underwoods? Although I have been anxiously awaiting House of Cards, nothing can prepare me for the manipulation that the Underwoods will do — except maybe binge-watching the entire Season 3 of House of Cards in one sitting. Sound daunting? Well, Frank Underwood would never let a little thing like time stand in his way. Plus, as far as binge-watching goes, it's really not that unattainable (trust me, I know from experience) and it can be good for your soul (sometimes).

Ten minutes and 55 minutes is not too bad, you guys. My boyfriend and I watched Season 1 of House of Cards (and the first episode of Season 2) within 24 hours. We watched one episode at night on a Fri. (I had to go out in public on Sat. morning), but once I returned home at 1 pm that Sat., we barely took a break for 13 episodes, wrapping up around 12 hours later. So, seriously — you can totally watch all of Season 3 of House of Cards in one sitting. And I can guarantee it will be awesome. (Except for the fact that then you will have no more House of Cards to watch for quite some time — or possibly ever? Ahhhh.)

So for those ambitious go-getters like the Underwoods, here are some tips for binge-watching the entire new season of House of Cards.

I stream my Netflix onto my TV for larger screen viewing. But whether you're on the couch or cuddled up in bed (no judgments here), you need to be settled in for the long haul. Make sure you have an adequate amount of blankets and pillows at your disposal. Sure, you may be feeling fresh and fine during "Chapter 28," but you'll be singing a different tune come "Chapter 35." And make sure your attire is fitting for a binge-watch as well — sweatpants and a hoodie are my go-tos.

Stock Up On Some Goodies

Food is an important part of life — and thus, an important part of a binge-watch. You probably only need two meals or so in 11 hours, but plan accordingly. If you don't want to take a food prep break, frozen pizza and mac and cheese are always easy, solid choices. You can always do takeout too, but that will depend on what time your binge starts (Netflix is releasing the episodes at 12 am PT and 3 am ET). And if you're channeling Frank, you could always prepare some ribs to eat for this special occasion. (Maybe throw a fruit or vegetable in your diet throughout the 11 hours too.) I also like to have plenty of wine available, so get your boxed wine on. Claire never has to know.

Use Your Netflix-Mandated Breaks Wisely

I detest that Netflix makes you click Continue Watching when you've only watched two episodes. But! Make the most of it. It's kind of perfect as a forced pee, drink, or food break. (Here is usually when I get the aforementioned boxed wine.) It's guaranteed to happen into the third continuous episode watched, so just hold out if you can (err, that's not healthy, but you know what I mean). You can also use the intro (how many times do you need to see epic shots of Washington D.C.?) as a time to get up. And make sure you have "Play next episode automatically" checked in your Netflix settings — I literally have no idea why you wouldn't want Netflix to prompt you to watch TV forever.

My couch starts to become uncomfortable after a couple hours of TV watching (I wonder why?). To avoid bedsores and the like, why not do some seated stretches to keep the blood flowing? I also like to move onto my exercise ball for part of an episode to just give my butt a break. We can't all be as motivated to workout as Claire, but some movement in a 12-hour period never hurt anyone.

Only Invite Buddies If They Are Prescreened

I love my friends, I really do. But I don't always love watching TV shows I passionately care about in a large group (as I discovered when I watched the Red Wedding episode of Game of Thrones with some of my friends). The TV viewing experience is more intense for me when I'm not in a group of people and not distracted by wondering how they feel about what's going on or ridiculous commentary (which I'm guilty of). So, if you're going to go through with this House of Cards binge, make sure that if you aren't doing it alone, the person or people you are doing it with have the same expectations and habits as you. It's also good if you have no filter with them so you can shout, cry, and go "What the fuuuuuuuu*k?" in front of them with no hesitation since you know House of Cards will make you feel all sorts of unexpected feelings.

Make Plans To Go Out The Next Day Or Night

You did it! Holy crap! It's now time to feel elated, yet a baby bit depressed. Since you probably didn't see the outside world in awhile, make sure you schedule some time away from a screen. As engaging as Frank and Claire's conversations can be, you weren't really a part of them (I know, I know — this is hard to believe), so social interaction with humans is good too. Go talk to some people and remember the world isn't always as cruel as the Underwoods make it.