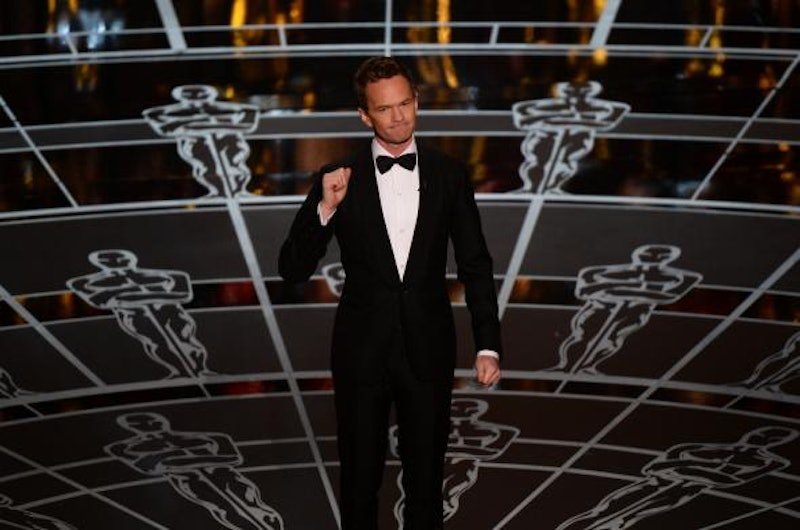 Most everyone was excited for Neil Patrick Harris’ go at hosting the Academy Awards. Harris has proved himself a powerhouse emcee at the Tonys, Emmys, and a number of smaller organizations’ ceremonies, and would more than likely instill the same charm and passion into his first of doubtlessly many turns as Oscar ringmaster.

Man, we were off base.

Harris’ opening number, while initiated rather abruptly — just a few moments after he was announced, midway through what would seem to be a spoken-word introduction — gave promise. It was light, energetic, and riddled with the childlike pomp and optimism associated not only with Harris but with the Hollywood of yore. A celebration of cinema as a bona fide work of magic, it lacked the bite of Ellen DeGeneres, the smarm of Billy Crystal, the lewdness of Seth MacFarlane, and even the postmodern self-deprecation of Hugh Jackman. And it was good!

But then, with the remaining three hours and forty minutes yet to conquer, came the demand for humor. And Harris didn’t know whether to stick to his usual whimsy or kneel to the ceaseless thirst of pop culture snark. So he tried a little of both. And the result was…well, you saw the show.

See, it’s not Harris’ fault for thinking that the hosting gig demands an air of cruelty. That’s what we expect, and even want, applauding loudest for the balancing act midway between good-natured and Gervaisian. Harris tried a few runs at the innocent — every time he returned attention to his snark-free magic trick routine, or padded his introductions with G-rated wordplay, people were befuddled. “He’s doing puns at the Oscars?” We didn’t get it. This wasn’t the right kind of comedy.

Now, we can’t discount the possibility of Harris’ failings owing blame to little more than poorly written material. But something suggests that even the best machinations of this sort of shtick would have fallen flat.

Think of the biggest laughs of the evening. They were jokes about John Travolta’s creepiness and about the Academy’s toxic aversion to minority artists — topics that necessitate a little bit of vitriol. But even when earning applause for his jabs, Harris seemed uncomfortable, like he was tampering in a world in which he didn’t belong: a world demanded by the increasingly cynical viewing public. But that isn’t the only party making large demands last night.

The beck and call of the Oscars itself is, unsurprisingly, the loudest among the awards shows. Nobody hosting the Tonys isn’t already tailor made to host the Tonys. The Golden Globes allows for — hell, even beg for — creativity, innovation, and personality. And the Grammys is a bona fide nuthouse; there’s really nothing any host can do to try and reel that one in. You just have to let it take you over.

But the Oscars demands an air of dignity, of importance. The Academy holds itself in such high regard as to insinuate that its show — a celebration of art, pop culture, contemporary celebrity, and many other constructs of frivolity and fun — be taken seriously. This is not a problem we find with fellow awards organizations; the Oscars stands alone as the show that feels restrictive and suffocating, allowing only certain kinds of fun to peer through.

Traditionally, this wasn’t much at conflict with the cravings of the American audience. But as the Internet strengthens and cynicism prevails, we find pearly routines like Harris’ opening number becoming all the rarer. Jokes at the expense of movies, of actors, or celebrities, of the culture on the whole are taking hold.

So what lies in the middle section of the Venn diagram representing America’s lust for hostility and the Academy’s air of importance? It’s very tough to say, but certainly not the sweet and silly Neil Patrick Harris... though it isn't entirely his fault!

More like this
Remember When Benedict Cumberbatch Announced His Engagement In A Newspaper Ad?
By Hugh McIntyre
Tom Cruise Gives His Honest Review Of Lady Gaga’s New Song For 'Top Gun: Maverick'
By Hugh McIntyre
Regina King Puts Her Career, Family, & Friends Before Romance
By Jake Viswanath
Selena Gomez’s ‘SNL’ Hosting Debut Had Twitter Gushing Over ‘Barney’ & Wigs
By Stephanie Topacio Long
Get Even More From Bustle — Sign Up For The Newsletter