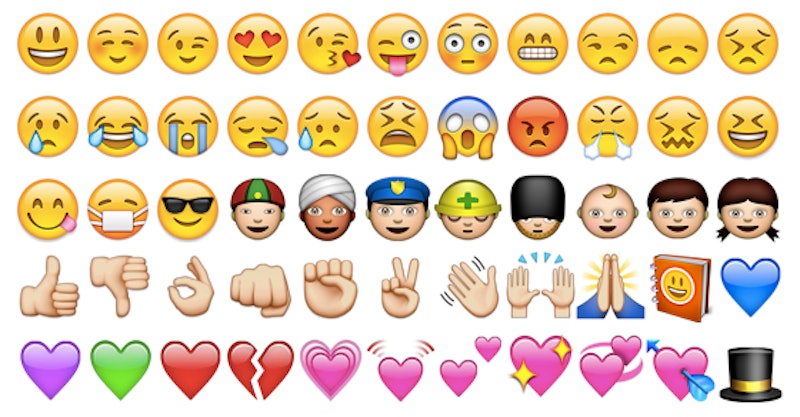 Even if it isn't releasing a new model of the iPhone just yet, Apple couldn't wait until fall to give the world something to talk about. In the technology world, they're kind of like that youngest sibling who constantly needs to remind you that they exist so they can get attention. So on Monday, Apple released a new beta version of iOS X to developers, which includes 300 new emojis. The emojis will include all your old favorites, but in response to the public's call for more diversity in tiny smiley face pictures, each person icon will have a customizable skin color.

Each face — for example, the iconic mustachioed man — will appear in your home emoji screen (I can't believe that is a phrase I just wrote) with yellow skin, as a kind of neutral home base, because no one actually has bright yellow skin like a cartoon smiley face. Then, when you hold your finger over the icon, five natural human skin colored faces will appear, ranging from ebony to ivory. Then again, if you really still want to use the yellow version, I guess you're free to do so. After all, maybe you're texting about jaundice.

Increased diversity in mainstream technology is obviously an improvement on the almost completely white selection of emojis that have been available until now. You still can't get the black Santa Claus or Asian salsa dancer on your iPhone yet, but Apple is reportedly planning to offer a public beta of the new OS in March. But it never hurts to plan ahead. So aside from more representative faces to express what you're doing or feeling, no matter your nationality or ethnicity, what else will these new emojis allow us to do? After all, there are 300 of them — and they aren't all just new iterations of the same old icons. Here are six messages you can — and can't — send with the new set of emoticons.

This important new feature will take care of that situation where you just need everyone to know that when you text them a watch emoji, you're talking about your slammin' new Apple watch.

"Can't Wait To Make Some Sick Roasted Sweet Potatoes Tonight. You In?"

When you send this emoji, you might want to include the existing eggplant one just for comparison. If I didn't know any better, I would probably think the roasted sweet potato was just a halved eggplant. Since I am a trained emoji connoisseur, I know the difference, but your grandma might get all excited about eggplant and come over only to be disappointed because she doesn't like sweet potatoes. All I'm saying is, be careful.

There are all kinds of new family emojis, reflecting the fact that there are all kinds of family structures in the U.S. and not all of them are of the 1950s-style nuclear variation. Of course, some of them are, and you can still have your classic family emoji — the difference is that with the new emojis, gay men can express their enthusiasm for dressing their partners and sons only in complementary blue-green colors if they choose.

For some bizarre and unforgivable reason, Apple has still not thought to include a redheaded emoji in their otherwise wide selection. I would now like to speak directly to whomever has the title of Official Senior Emoji Idea Collector, which I am 100 percent sure is real title at Apple: Redheads are not dying out, and we would like to see some representation in the next round of emoticons.

"What Time Is It? Burrito/Taco Time"

Another inexcusable omission. Are people really supposed to spell out the word "burrito" or "taco" every time they want to communicate with their friends about ordering Mexican food? For some of us, that's twice a day. Not everyone has tons of time to sit around spelling out words — that lack of time is exactly why we eat food in rolled-up form.

I'm not sure if everyone else wants this emoji quite as much as I do, but it would definitely be a useful icon for college students like myself who only own one pan and use it to make everything from hot chocolate to high-protein breakfasts. And for the record, I'm pretty sure this demographic is greater than just me.

More like this
The True Meaning Behind Each Hand Emoji
By Bustle Editors and Emma Carey
Here's What The Face Emojis Actually Mean
By Bustle Editors
When Did Tamagotchi Come Out? In The U.S., 25 Years Ago
By Kaitlyn Wylde
Starbucks' Summer Menu Includes A New Chocolate Cream Cold Brew
By Emma Garza
Get Even More From Bustle — Sign Up For The Newsletter