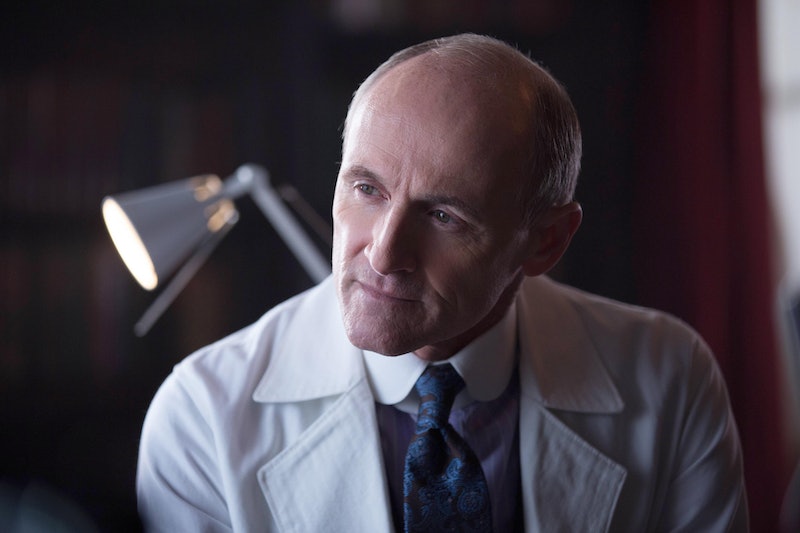 Gotham Season 1 is starting to come full circle — who would have thought that we would have heard about the corruption going on in Wayne Enterprises again so many weeks later? And likewise, an offhand mention of a "Dollmaker" back in the second episode "Selina Kyle" finally paid off when Fish Mooney found herself trapped in a "facility" owned and operated by the very, very, evil Doctor Dulmacher, played by Colm Feore. Now we know why he was kidnapping street kids earlier in the season — it was so he could sell them for parts. He's a human trafficker who sells human body parts on the black market. We don't know why... but sure looks like it pays well, because he's able to keep this facility up and running and the lawmakers looking in another direction (we've never heard Jim bring up illegal organ trading once). And given that he finally appeared in the flesh in a promo, I think we're finally about to meet Dr. Dulmacher when he comes face to face with Fish Mooney.

But we didn't find out just what the Gotham version of the "Dollmaker" is going to be just yet. In some of the comics, he's an infantile man who loves making real toys, in others, he's a madman tortured by his father. They're definitely going for more "evil" scientist rather than "mad" scientist in this one. Too crazy and he would have seemed like a Jack Gruber retread. This guy is like the doctor from Human Centipede actually wanted to make some cold hard cash by mutilating people.

And after seeing this trailer, I am very worried for Fish's fate, because while she's of course a total boss all by herself, she often needs a little backup from Butch when it comes to situations like this. Just the power of her negotiation might not be enough to save her — it looks like Dulmacher has his men remove one of her eyes!

Now I know Fish can still kill it sans depth perception, but that proves that Dollmaker isn't kidding around. But the one thing we know about Fish Mooney is that eventually, she always survives — so I'd watch out if I was Dr. D.