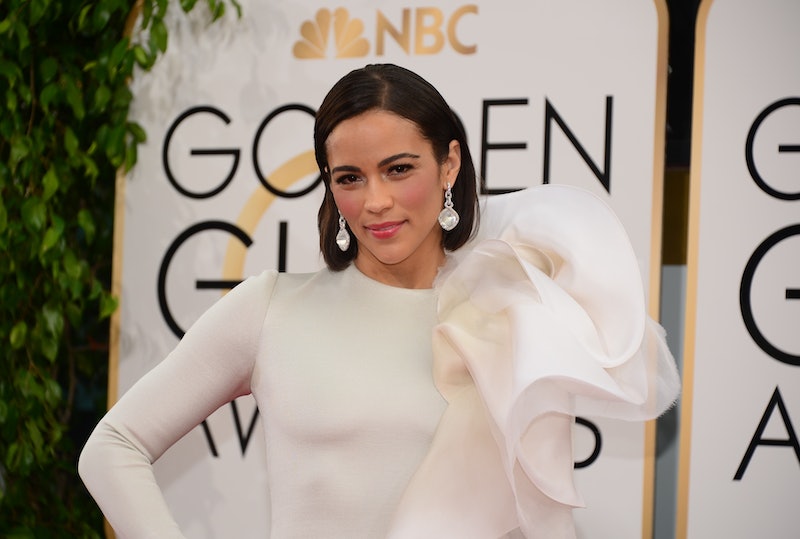 It's unfortunate that Paula Patton is known best for her highly-publicized divorce with King Of Smile Robin Thicke, because she's got her own thing going on. Paula Patton just landed a major role as the lead in ABC's new pilot, Runner, a huge move in her acting career. So boom — suck it, Robin Thicke.

OK — so I don't want to make this a post just disparaging Robin Thicke for being the lecherous misogynistic that he is (even though he is). Rather, let's celebrate Patton for her newest role. In Runner, she'll be playing the lead Lauren Marks, "whose perfect life is ripped apart by a twist of fate. To uncover the truth, she must follow a trail of lies that take her into the world of cartels and the illegal gun trade between the U.S. and Mexico." Sounds like a better version of the later, more extreme seasons of Weeds, largely in part because Patton is a woman of a color.

Patton's been an actress for a long, long while, and her first role was in the cult classic Hitch (cult classic according to Me). She starred in Mission Impossible: Ghost Protocol and Precious. A role in a new show is just another point in Patton's corner. Runner's pilot will be directed by Michael Offer, who directed the How To Get Away With Murder pilot, Shonda Rhime's runaway hit (everything she touches turns to gold, though, let's be honest), so there's a good outlook for Runner.

But we gotta talk about Thicke for just a minute here. When Patton filed for her divorce with Thicke after over 21 years together (the two began dating when Patton was still a teenager), Thicke went (even more) off the rails and released an entire, pathetic and creepy album whining for Paula to come back to him. It was called Paula, speaking to that particular brand of Thicke genius. But Paula took the high road, or what could be better called the "I don't give a shit" road, deactivating her Instagram and not tweeting anything for a while.

So good for Patton for leaving Robin Thicke in the dust, and hopefully his career will go to dust too while she shines on like a crazy diamond.