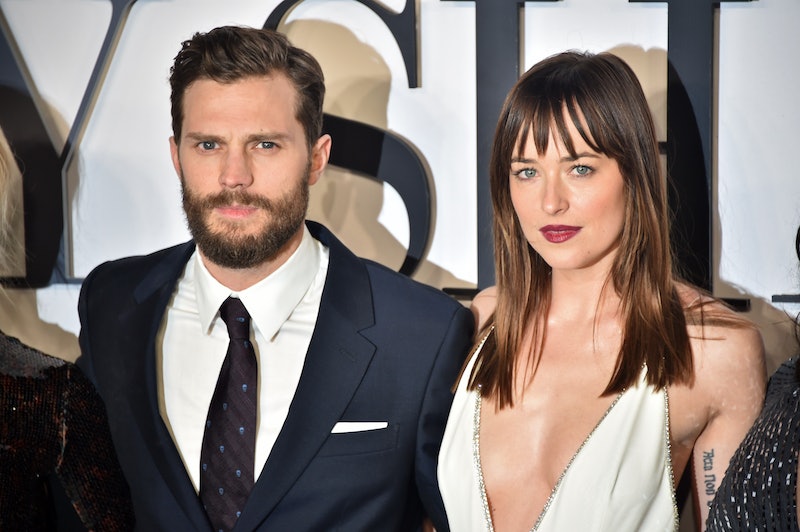 If you thought we were done talking about Fifty Shades of Grey, plot twist: You were oh so wrong. The latest juicy rumor surrounding the E.L. James book-turned-titillating film is that Jamie Dornan, aka Christian Grey, may have jumped the Fifty Shades Of Grey ship and allegedly might not be appearing in the franchise's subsequent sequels, Fifty Shades Darker and Fifty Shades Freed.

Which is total bollocks, but there are also rumors from "insiders in the industry" that director Sam Taylor-Johnson won't be coming back either, that E.L. James might want to write the script for the next two films, which could push back the release date to 2017, and that the next two will be full-blown musicals starring Neil Patrick Harris.

So the last one's untrue (or is it?), but it's only a tiny bit more ridiculous than the rumor that Jamie Dornan is packing up his whips and chains and moving on to more PG stuff — reportedly, the story goes that he was leaving the franchise because his wife, Amelia Warner, was uncomfortable with the sex scenes. But fear not, fans: because Dornan has already signed on for the next two films in the series, he's not going anywhere!

But, what if we were in a world where he abdicated his role of Christian Grey? There's still hope: besides the former band of dudes that auditioned for the film, these guys could easily step in to the Red Room of Pain.

He said it himself: he's the epitome of male beauty.

Parks and Recreation is ending on Tuesday night, but Tom Haverford should live on, and Fifty Shades would be the perfect role for him. He's dapper as hell, he's an entrepeneur (Tommy's Bistro is booming), and he definitely appreciates the finer things in life. Not to mention that everywhere he goes, he's walking on red carpet. And, he knows how to treat his boo.

He's a no-nonsense lovemaker, usually, but we know he goes off the rails with the likes of Tammy Two. A wild card.

I could see it.

And the whole thing would be reshot as a version of the Bound 2 video with a darker palette. Still sexin' on a motorbike, though — can't abandon that crucial element.

The Fresh Prince is having a comeback this year, with diverse roles in Bounty, Suicide Squad and Concussion. Why not get Fifty Shades on his resume, too? It can't be any worse than After Earth. (Could include guest appearance by DJ Jazzy Jeff.)

Taking Ana Steele straight to Flavor Town. (I rescind this immediately. I apologize.)

Plot twist: it's the movie he finally wins an Oscar for.