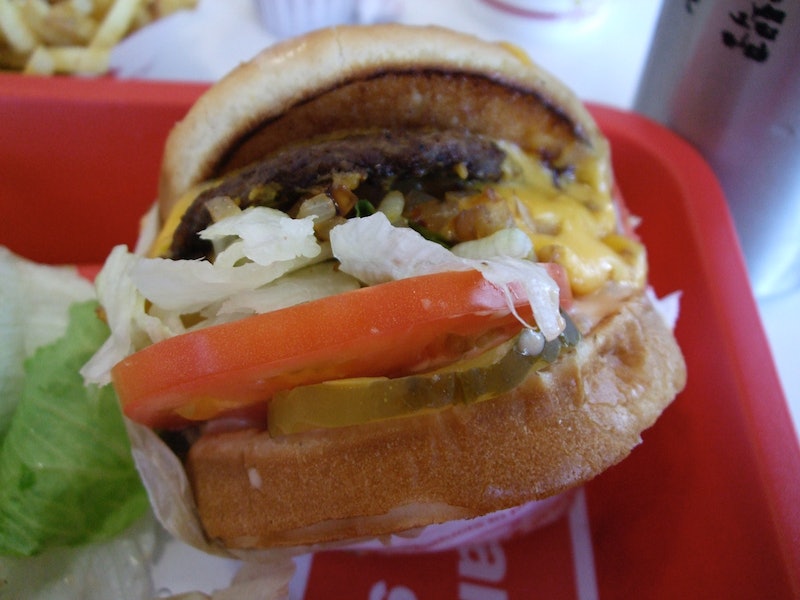 YouTube cooking shows are a proverbial dime a dozen these days — but I'm more excited for this new one than I've been about any others for a very, very long time. It's called Put It In The Pizza, and for its inaugural episode, it attempted to make an In-and-Out Double Double Animal-Style pizza. You heard me: Copycat In-and-Out… on top of a pizza. That? Is truly the stuff dreams are made of. Or maybe it's just the stuff my dreams are made of. Whatever — it doesn't matter. What does matter, is that the final result looks mind-blowingly delicious. A round of applause for this mad pizza genius, please!

Put It In The Pizza is a new webseries devoted to stretching the very boundaries of what we understand to be pizza. The beauty of the food itself, after all, is twofold: One, it's not actually that difficult to make; and two, the possibilities for what you can do to it are virtually endless. Accordingly, Put It In The Pizza's host, who goes by Mikey Man, will be conducting a new experiment with each episode.

Cheeseburger pizza is already pretty tasty if done correctly, so it stands to reason that an In-and-Out Double Double Animal-Style pizza will be knock-your-socks-off amazing. You might even, as Foodbeast suggests, add fries and make it Monkey Style. All's fair in love and pizza. Here's the blow-by-blow in nine pictures; scroll down to watch the whole video:

Put It In The Pizza's Mikey Man walks us through his recipe, but you can also just use whichever pizza dough recipe you like the most. Heck, store-bought dough would probably work just fine if you're either scared of yeast or short on time — just don't use that Bobili nonsense. When I say dough, I mean dough — not some weird frisbee made of something that bears only the slightest resemblance to pizza dough.

Here is a handy list. Learn it. Love it.

Personally, I happen to think red onions caramelize the best; you can make pretty much any type of onion work, though (except maybe cocktail onions. I imagine those would be difficult). Dice 'em, let a healthy slug of butter or olive oil heat up in a pan, toss the onions in, and let them sit there on low until they're browned and almost falling apart. Note: Caramelized onions are good on everything, so I would totally understand if you stopped here and devoured them on top of whatever leftovers you currently have in the fridge.

If, though, you choose to carry on, you'll want to do this:

The sauce is pretty much what makes an In-and-Out burger an In-and-Out burger, so obviously you're going to have to do your best to replicate it from scratch. Mikey Man combines six parts mayo, two parts ketchup, and two parts relish; you could probably also get away with using Thousand Island dressing, but I'm willing to bet that it will not be the same. At all.

6. Roll Out Your Dough

Flour will help stop it from sticking to your counter and to the rolling pin, but don't use too much — you don't want it to get too dry. Then you will be sad. Once the dough is sufficiently rolled, spray a pizza pan with non-stick cooking spray and transfer the dough to it. Roll the edges up to get that classic pizza crust edge.

Do you have tomato sauce? Leave it on the shelf — you don't need it. Instead, take your In-and-Our sauce and spread it all over the surface of the dough. Add your caramelized onions; then your mozzarella; then your American cheese; then your hamburger bits. It should look roughly like the image seen here — although I also think you should feel free to use your hamburger bits to draw a smiley face on your pizza's surface if you so desire.

9. Add the Finishing Touches and Enjoy

Once it comes out of the oven, top the pizza with pickle slices, shredded lettuce, and diced tomatoes. Enjoy your glorious creation. Because, I mean… it's pizza… and In-and-Out. What's not to love?

Watch the full video for the complete step-by-step — including some very special pizza-making techniques and Mikey Man's dough recipe — below: