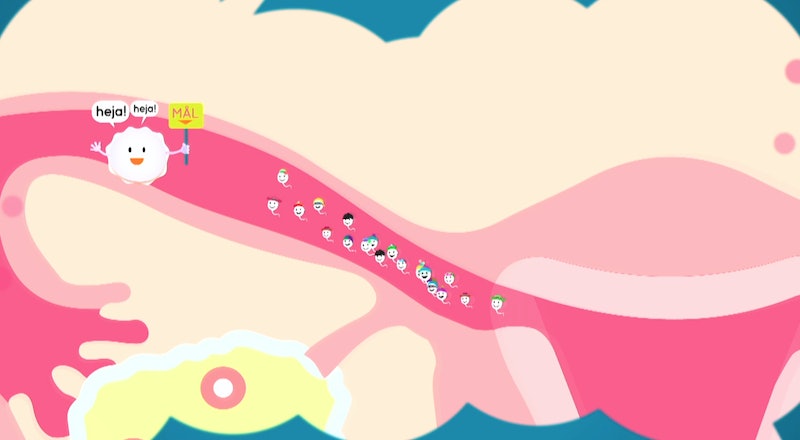 As a person who sat through way too many years of the public school system barely explaining sex to me, I never though I'd be so excited to learn about it again. That was only because I had no idea that this Swedish video on "How Babies Are Made"—featuring dancing sexual organs, sentient gametes, and a soundtrack that will make you want to jive along with them—was going to come into my life. I know approximately two words in Swedish from an international coloring book someone gave me as a child, but it doesn't even matter. Even without any linguistic understanding, this cartoon manages to cover every question you ever had about sex as a kid in less than two minutes.

It isn't totally surprising that this breakthrough of an educational video came from the same people responsible for last year's cartoon video of a dancing penis and vagina, which was a confusing and fantastic celebration of our sexual organs. This new video is set to air on Swedish television on March 1, but already has received viral attention and support after being posted to Facebook. It is concise, informative, and most importantly, explains sex in a positive, unbiased light, giving kids a firm foundation for eventually setting their own standards about their sex lives and not a standard society set for them. This is the winning body positive sex talk the world has been waiting for.

Also, I'm not sure which words in Swedish mean "willy" and "twinkle," the nicknames they give penises and vaginas in this video, but I am somehow even more won over by this adorable plot twist of a translation:

"All you need is for an egg and a sperm to meet. And they can meet with the help of a test tube or a jab. Or an adult willy and an adult twinkle can get together and make babies inside the body."

Where were these people when I was in the fourth grade thinking that sex was basically like getting punched in the crotch by a water gun?! Here's to the next generation of humans hopefully being a lot less confused about their bodies thanks to more body positive discussions and these video champions: